Ultima Online (UO) is an MMORPG that is currently published by Electronic Arts and launched on September 24, 1997. The game is subscribed to by thousands of players worldwide across dozens of Shards. The game client uses an "isometric" perspective, which basically seems to mean overhead, with a tilted camera. This was about the same perspective used by many of the Ultima single-player games upon which Ultima Online was based. 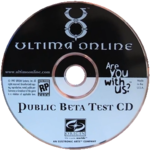