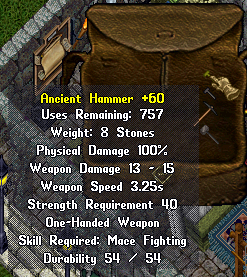 A hammer shown along with other BOD rewards.

An Ancient Hammer is a enchanted Smith's Hammer for use by Blacksmiths, acquired as BOD rewards. It comes in a variety of Blacksmity bonus intensities (+10, +15, +30, +60). Simply stated, a blacksmith with 70 skill points who equips an Ancient Hammer +30 can craft items as if he or she were a Grandmaster blacksmith.

Ancient Hammers are not permanent tools; each comes with a set number of uses. Every attempt to craft smith type items while holding one removes one charge (regardless of whether the hammer itself was used directly). The hammers will break, or disappear, at 0 charges.

Their effects are not limited by your skill cap. Equipping a +60 hammer at 120 skill will bring you up to a massive total of 180 points.