The most valiant warriors in Britannia gathered this Saturday night in Jhelom's Dueling Pit to combat monsters gathered from around the world. Lord Hughert, along with his companion, Arkon, directed several hours of the most engaging gladiatorial activities that the "City of Valor" has ever witnessed. Cheering spectators watched from the bridge over the arena, some drinking and others waging high stakes on the epic battles below. 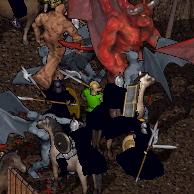 Combatants were invited to line up at the pit's entrance and choose from a variety of creatures. Among the chosen opponents were fiercesome trolls, bloodthirsty orcs, and viscious lizardmen. The heroes entered the arena singly or in groups, and one trio of contestants tested their mettle against an angry fire-breathing dragon. All warriors were allowed to keep whatever loot they found on their vanquished foes. Tonight's finale's theme was "Creatures of Rock", and included a horde of earth elementals, stone harpies and stone golems.

Lord Hughert is a world-reknowned animal hunter, and he and Arkon are part of a group known for collecting all manner of dangerous creatures. Every week or so they lead their troupe on an expedition into a far-off, exotic location, then return to Jhelom with the creatures they've collected. Hughert was heard to comment afterward that his group is making plans to try to bring this event to Jhelom (on the Trammel facet) every week.