BNN: Once Upon a Midnight Dreary

In the news this day, a chilling tale that swept over our entire world for the space of an evening. I’m Cara Newsman and the tale I bring today is one of chilling magnitude. While witness to only some of the events, I have it from reliable sources that the events about to be revealed here are, in fact, true.

I had just parted company with a sage friend of mine who was on his way to an auction at an establishment called Red Devil’s. I myself was headed to a nearby tavern by the name of Kazola’s. Upon my arrival I was greeted by an assortment of hell hounds, reapers and various undead. Not being so thirsty that I was willing to fight my way to the tavern, I instead traversed the facets and then recalled to Kazola’s Jungle Tavern. To my astonishment, I was greeted there by another group of hell hounds and reapers.

With a frown on my brow and a thirst in my throat I made my way to the town of Sanctuary and their fine tavern. My shock was understandable as a small group of undead were found pounding upon the front doors of the tavern. With a heavy sigh I traversed the facets once again thinking perhaps I could find a drink at the Temple of Mondain. Surely they would not be beset by the creatures I’d run into so far.

Alas, I was wrong. Oustide the temple, aside from the usual desert creatures, were three reapers with assorted hell hounds howling at the moon. Before I decide where to go next, my sage friend contacted me via a communications crystal to inform me that Red Devil’s Auction house was under heavy attack by skeletons, liches, hell hounds and reapers! I began to detect a pattern here, so, still wishing that drink, I went to the town of Britain.

The city was showing signs of normal activity. While I wondered about the odd ‘attacks’ going on, I managed to find an ale and keep my ear open for any news of people actually fighting these things I’d seen. I was not disappointed. Before I could finish my ale, a bleeding man ran into the tavern and started babbling on about undead spewing forth from the graveyard north of the city. I grabbed pen and parchment and headed in that direction, but was interrupted by another call on my communications crystal. It was my sage friend again who was calling to tell me that the town of TUR was under attack, in both facets!! Was there no end to this madness?

My sage friend offered a gate to the site, as the fighting was heavy. I accepted, figuring the action to be more intense in the wilds rather than at the graveyard to the north where the town guards would surely be stepping in to dissuade any undead from venturing very far.

Bodies littered the ground as I arrived and my sage friend didn’t look very hale himself. He shoved a roll of parchment into my hands, claiming he’d managed to capture a few images of the fight at RD’s before he had been forced to leave. He then told me to call on the crystal if I needed a gate out and that he was off to seek a healer to tend to his wounds. 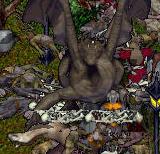 No matter which way I turned, there were skeletons and liches, reapers and hell hounds, wraiths and dire wolves. Some of the TUR folk were trapped inside (or perhaps defending) a tower while others were ranging around the area. I can’t say how long it went on for, but as the living began to outnumber the dead a moongate appeared and a bleeding man stepped through. He was calling for help, saying that the Temple of the Black One was under attack.

I was intrigued by this ‘evil’ that did not seem to take sides in the ‘wars’ of our world, but seemed to strike at any and all places. I took the gate and was greeted by a now familiar sight. What astonished me was that there was a specter there that was actually taunting the defenders. It kept asking folk to come over to the side of the undead, to join it. I’m not too proud to say that my blood ran cold as I watched it chase down the defenders, then back off and cackle as its minions would finish off one person or drive someone away.

The night deepened and after a long while the specter fell to the blade of a fighter and the song of a bard. I called my sage friend and asked for a gate to anywhere. He hadn’t been to the Temple of the Black Dragon and suggested we meet outside of Vesper, deciding where to go from there.

I arrived in Vesper only to learn that there had been undead terrorizing the cemetery there in Trammel as well! A most evil night for our world. The rising of the sun seemed to banish the dreariness of the night, to set aside the fears that ran rampant across the land. Would that I could have been in more than one place at a time to give a better report, but alas, even I am not that good a reporter. So I leave you with this mystery, dear reader. Was there a reason for the massive attacks on both facets? Has some new evil seeped into our world? I have no answer for you at this time. Until next time, I pray the virtues be with you all.