A talking parrot was spotted in Britannia last night in the city of Vesper. The bird was small, green and constantly squawking, but it when players spoke to it... it responded with a whistle and asked them to seek out a gift for its master. 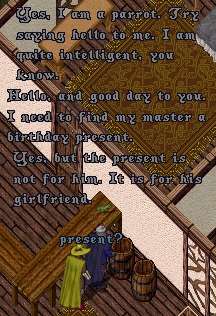 The bird was found in Vesper's Busy Bee beekeeper. Apparently the parrot is the property of Shane the beekeeper who is one of the part-time workers there. While Shane was out tending to the hives, the parrot struck up a conversation with passersby who wandered into the shop after hearing the constant squawking coming from the building.

One citizen who evaluated the intelligence of the bird was startled to find that the results showed the parrot to be "moderately intelligent." Maybe that explains the lengthy discussions the bird had with others.

When greeted in a friendly manner, the bird even had a request. It seems the parrot wanted to find a birthday present for his master's girlfriend. "I can't believe my parrot picked up talking just by listening to me jabber on while I tend the bees," said Shane, the parrot's master. "He must have heard me muttering about not having a birthday present for my girlfriend, Loriupps, yet. She is a noble warrior, but has always been looking for a new weapon with a unique and lovely name.

The parrot suggested searching the trash barrels behind the Vesper Museum. When questioning the bird, it said that sometimes some perfectly decent weapons are thrown out in the barrels.

The Vesper Museum does keep some weapons and armor in the display cases for travelers to look at. When contacted about the thrown out weapons, Jaal Ganra, one of the museum volunteers said, "We have so many submissions that occasionally we do have to toss a piece or two of less display-worthy items in a barrel behind the museum, but it very rarely happens. In fact, we were just commenting in The Busy Bee yesterday how we just had to put some items out back because we had too many. I never would have thought that Shane's parrot would overhear us and repeat that."

"It amazes me too," said Shane, "but that bird somehow made the connection that I needed a present and that there was a way he could help. I am speechless, unlike my parrot."

While looking through the trash barrels, some of the people who took the time to listen to the bird found just what Shane was seeking. Inside one of the barrels was a war fork named Uutansallariaana and a short spear named Cutsalle.

"Two fine names and fine weapons to give my true love!" said Shane. In fact, he thought so highly of the named weapons that he gave 500 gold pieces for each one. "I know it seems like a lot," said Shane, "but my work and my existence are humble. I make a decent enough living with my beekeeping work and have not much need for the gold I make. If I can use it to make the ones I love happy, it only comes back to me in a richness that can never be had with mere gold."

"And to think that my little parrot was what got this whole thing started. I'm going to have to take a closer interest in my little green-feathered friend."