The mainland south of Skara Brae, known to locals as Corwyn, the City of Virtue, was once again subject to the horrors of the late pirate captain Martin Bloodeye and his undead crew. Bloodeye, recently thought defeated, returned to Corwyn with one final hunt for his "Bloodeye Cutlass."

Bloodeye first came to public attention as the result of nearby archaeological digs that had disturbed the local dead. Two men from the Museum of Vesper had come into the area seeking the infamous Bloodeye's last known treasure, including his infamous "Bloodeye Cutlass." Seamus and Simon Finlay, the relic hunters from Vesper, recovered this artifact but dug up more than they anticipated: Martin Bloodeye and his crew.

Several instances were reported in the days that followed of Bloodeye leading his undead pirate crew as they rose up and hunted for the "stolen" cutlass. Vigilant local defenders beat back the hordes of evil again and again, and in time they were rewarded with the destruction of the skeleton named Martin Bloodeye. However, this did not stop the resilient captain.

While a group of defenders had gone to Vesper, seeking the aid of the Finlays, Captain Bloodeye somehow reformed his spirit into something resembling a human body. He once again led his minions against the Corwynites and any who allied with them, his forces larger and fiercer than ever before.

The defenders returned with the Finlays, who were able to use the Cutlass against the undead masses. Bloodeye seemed taken aback and confused that someone else could wield his weapon. Bloodeye was beaten down in a flurry of attacks, his body pulverized beyond recognition. 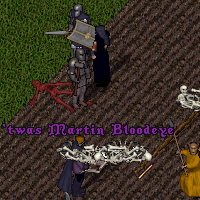 Experts Simon and Seamus Finlay were able to confirm that the pirate and his crew were finally defeated, and returned the artifact known as Bloodeye's Cutlass to their Museum.