Corwyn, a city located on the mainland just southeast of Skara Brae, was under vicious attack recently from Undead pirates. The battle did not last long, however, as vigilant locals were able to quell the undead threat, keeping it from growing out of control.

Town Cryers immediately alerted locals and travellers into the Corwyn vicinity to “beware the murderous undead hordes,” citing the reason as “Undead pirates once again attacking locals on mainland, south of Skara Brae.” 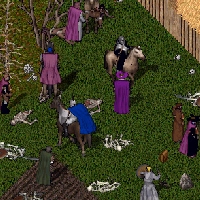 Mayor SortsAngel of Corwyn arrived quickly at the scene of the battle, defending her city alongside her fellow citizens. She was said to be in good spirits after the monsters were subdued, even though she was allegedly reported to have been knocked unconscious at some point during the fracas.

Several areas south of Corwyn were recently in the news, noted as the location of both archaeological digs and other attacks from the Undead.

Simon and Seamus Finlay, of the Museum of Vesper, were responsible for the diggings. They sought and recovered a long-lost relic known as the “Bloodeye Cutlass.” During their search, however, nearby farmlands and wilderness suffered from unrelenting attacks by skeletons, wraiths, and the like.

The brothers Finlay originally claimed that the collateral harassment would stop as their diggings ended, but have been unavailable for comment regarding the new uprising.