As I was wandering through Yew cemetery to inspect and maintain the graves there, I stopped dead in my tracks, terrified at the sight I beheld. The skeletons of those that I had buried, left to their eternal slumber, had risen from the very ground and were lumbering about the cemetery grounds! My first thought was to flee for my life, but then I noticed that they were not paying me the slightest attention. Intrigued, I crouched behind a gravestone and watched silently.

It seemed as if the putrid things were digging, perhaps searching for something buried beneath the clotted remains of their graves. Other than that, they simply kept shifting in awkward steps, both around the perimeter and within the small crypt at the very heart of the graveyard. I could hear a chilly, yet enchanting female voice shout dangerous commands at the skeletons from within. With bated breath, I approached the crypt doors and carefully peeked inside. By the dim light that crept through the rotting wood and crumbling stone of the crypt’s entrance, I began to make out shapes in the darkness. T’was then that I saw something beyond all measure of dread…

Skeletons were struggling to speak to a beautiful young woman. Most unsettling was the fact that the skeletons actually appeared scared - for as far as that is possible for a pile of reanimated bones. I believed I could hear their bones rattling with fear, in much the same rhythm as my own. With great difficulty the skeletons spoke to her as mistress, and Milady Lynn. It seemed as if the skeletons were ordered by the Lady Lynn to find a book. Truly, t’was quite disquieting to see how she commanded her undead henchmen.

Every time a skeleton approached her and told her that it had not found the object she was searching for, her voice would turn as cold as the very graves around me as she hissed something guttural yet edged with unnatural power at it. The skeleton would then shriek, a terrible, haunting sound, clawing at what remained of its face before exploding outwards, sending fragments of bones across the room. After such an act, the lady would call forth other skeletons to do her bidding. Seemingly rooted to the spot, I could not believe what I had witnessed. Had I truly seen such a delicate woman engaged in such gruesome and forbidden acts of necromancy? 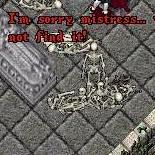 I was terrified, yet I could not look away. I was unwholesomely interested in what had happened to the long lost and forbidden art. I crawled back to the tombstone where I had hidden earlier, waiting to see what, if anything, would happen next.

The lady Lynn probably did not find what she wanted, for, soon enough, she had slaughtered all the skeletons in such a horrid way that I can nay bring myself to recall it fully enough to put into words.

Still deathly afraid that I might be caught by the teeming undead, yet irresistibly drawn to follow her, I crept, slunk, snuck and slipped all over the lands of Britannia in her wake. She visited the crypts of Yew and several other cemeteries across the land. All these locations were the scenes of terrible suffering and slaughter.

As I followed her through the dark passageways of the crypts I noticed that she favored zombies above the other undead. I think I heard her mumbling something about how delightfully easy they were to control. I listened to her speak to the many zombies that seemed to follow her all over. She spoke of a book. A book called “Domain.”

I do not know what manner of horrors this book might contain, or where it possibly came from, but it cannot possibly be a tome filled with good and beneficial knowledge if a such a necromancer, who wields her powers so contemptuously, wishes to find it.

Just when I began to have faith that the lady Lynn would not complete her quest and that the book she sought would remain lost for all eternity, my hopes were crushed. We had only just set foot in the cemetery of Jhelom when a pack of hideously malformed zombies rushed to aid her in her search. As I sat down to have a piece of bread for the duration of this round, I suddenly heard the terrifying, ghastly peal of her laughter.

Louder and louder, more raucous and guttural it became, until I could not help but cover my ears, to cower in the underbrush. The laughter, I will never, can never forget it – but e’en moreso I cannot forget what it surely must have meant. The lady Lynn has found that which she has sought across the lands of Britannia…and I fear - nay, I know - that our end has come. 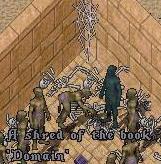