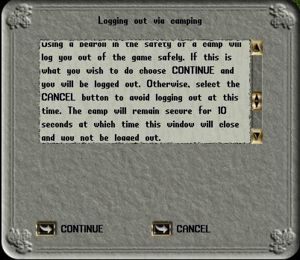 A Bedroll is an item used in conjunction with the Camping skill to logout in almost any location. It can be obtained at NPC provisioners in most towns for a modest amount of gold, or in some cases by Begging.

When a campfire is created from kindling, the Camping skill is exercised. After 30(?) seconds of no combat, a message is displayed indicating the camp has been secured. At this point, any character in the area who received the message can instantly logout by using a bedroll. The bedroll must be placed on the ground and then double clicked, twice -- once to open the bedroll and again to display the Logging out via camping menu, at right.

The bedroll will automatically roll back up when the menu is displayed, which prevents another character from using your bedroll. It is returned to your backpack if you opt to log out.

This skill was marginally useful in the early days of UO when few players owned homes. Carrying marked runes was of modest benefit due to rampant player-killing (and looting) by murderers prior to runebooks, and perhaps the devs overestimating the amount of ground players could cover. The Camping skill allowed for players to logout almost anywhere without a long trek back to a town. As more players became homeowners and runebooks allowed for the safe-keeping of runes and Recall scrolls, Camping lost what little utility it had.

These days, the bedroll is sometimes used for decorative or roleplaying purposes to indicate a wilderness/archaeological expedition or military encampment setting.