This dungeon, located under Castle Blackthorn in both Felucca and Trammel, was introduced with Publish 85. The dungeon is divided into two parts. The first part is a series of "catacombs" spreading out like a star from the entrance. The second part is a rift in space-time where sections of nine of the surface cities are replicated. The catacombs contain monsters and use normal spawn mechanics. The surface city "rifts" suffer random invasions by powerful creatures. 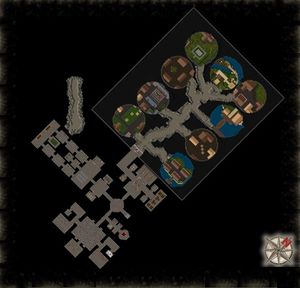 Castle Blackthorn was designed to be used in role playing scenarios and as such pets, flying, and spellcasting are prohibited in the castle, as is recalling or gate travelling into the castle or the dungeon below. Since players trying to access Castle Blackthorn Dungeon must therefore travel through the castle, a small amount of extra work is required to access the dungeon. First, runes cannot be marked in the castle, so the closest mark is just outside the castle gates. Second, when riding through the castle gates, the character will be dismounted and the pet either stabled or returned to statue form in the character's pack. Third, pets not being ridden will be automatically stabled while travelling through the castle.

Upon entering the dungeon, three paths will be available. To the South are generally harder creatures such as Balron and Dragon. To the West, generally easier creatures such as Skeleton and Brigand can be found, along with a broken wall leading to a cave full of Earth Elemental. To the North is a small room with Golden Elemental (and a forge! - a great place to collect ingots), Lich, Giant Spider, and the path to the rift invasions. 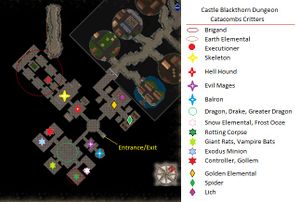 The catacombs contain a number of monsters at varying difficulty. This system allows for characters of almost all skill levels to have success fighting in this dungeon. Not only can you acquire gold and normal dungeon loot, but every skill level has the chance to get a Minax arti and therefore the more powerful Blackthorn Artifact. This is an excellent system for helping new or lesser skilled characters, while at the same time providing continuing content for higher level players.

One of the big questions is "What should I fight" in the catacombs to maximize my time and acquire Minax artifacts as fast as possible? Many players fight mid level creatures like the Evil Mage, since the spawn is so fast, and so many can be killed in a short time. Other players insist the Balron is the best path to riches as it is worth so many "dungeon points". No "One Answer" will fit here as this is truly a per character (for skill) and per player (for enjoyment) preference.

Arroth Thaiel's Observations - When deciding what to fight to maximize drop potential, keep in mind that it is not just how fast you kill something, but what that something is worth in "dungeon points" and vice versa. So, how can you figure out somethings "dungeon points"? Well, just use gold. After getting over 50 Minax drops from the catacombs I can tell you that with ~2000 luck, I need to collect about 45k (+/- 15k thanks to the RNG) in gold for a drop. You don't have to collect the gold, just know how much gold something gives and use that as a proxy for "dungeon points". For instance, a skeleton drops ~35 gold, an evil mage ~150 gold, a balron ~1250 gold. With ~2k luck, I have to kill about 37 balrons for a drop, about 300 evil mages, or about 1300 skeletons - Yikes! I've tested this with balrons, evil mages, earth eles, liches, gold eles, and rotting corpses. It has never mattered what I'm killing. With ~2k luck as soon as I've killed enough to get around the 45k (+/- 15k) gold mark (regardless of if I'm picking up the gold or just counting kills) I get a drop. So, can I kill 8 evil mages (for 1200 "points" at 150 gold/points per mage) in the same time it takes to kill 1 balron (worth ~1250 gold/points)? Depending on the spawn, why yes, yes I can. However, over time I can probably kill 37 balrons faster than 300 evil mages. Just recognize that however you decide to do it your luck will play a factor and that you can use gold as a proxy for "dungeon points". - Arroth 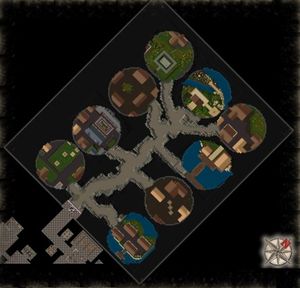 As in the catacombs, creatures killed during an invasion can award Minax artifacts directly into the players pack. Being such high level creatures, Captains have the greatest chance at awarding an artifact, but minions may as well. The destruction of the Lighthouse Beacon after the final wave of the invasion, and thus the freeing of the rift city, can also award Minax artifacts. 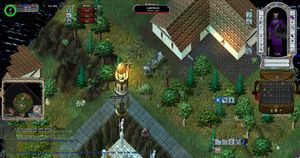 The beginning of an invasion with the lighthouse beacon at full health. 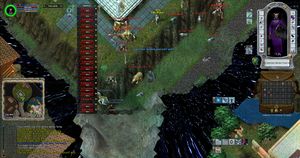 An invulnerable (yellow) invasion Captain and the vulnerable (red) minions. 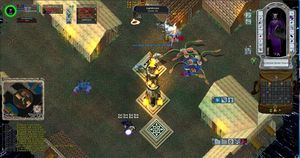 A damaged Lighthouse Beacon during an invasion.

A destroyed Lighthouse Beacon after the final wave of the invasion.
Retrieved from "https://www.uoguide.com/index.php?title=Castle_Blackthorn_Dungeon&oldid=66344"
Britannian Date July 18, 404