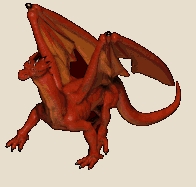 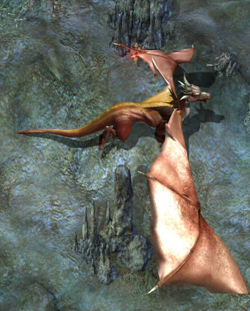 Dragons are a wise and ancient race. They are terrible indeed in their anger, but they are neither cruel nor rapacious in their own nature. Any who says otherwise speaks not the truth. It is true that dragons, like all other creatures of free will, have the power to choose, and that some, succumbing to malice or madness, have descended in wrath on helpless humans, and been put down in consequence. When a man dies beneath a dragon's claws, however, it is far more often the case that he has succumbed to his own greed, and gone foolishly seeking to rob the dragon of his fabled hoard.

The blood of dragons is also coveted, for it is potent in the creation of magical spells.

The potent magicks intrinsic to the draconian physiology are amply shown in their ability to fly adroitly, though their weight is many hundred stone, and in their ability to belch forth mighty streams of consuming flame. No other creature is as terrible in war as the dragon.

Jointly, dragons dwell in caves and in dungeons (untroubled in their might by the evil creatures who may dwell therein also), and they guard their hoards and their eggs with all ferocity. Solitary beasts roam the surface, wherein they seek thier sustenance. Their natural lifespans are measured in millennia, and they never stop growing, so that the wisest and most ancient of dragons are also behemoths of vastness unequaled.