Covetous is one of the seven Anti-Virtue Dungeons. Its values are the opposite of the Sacrifice virtue. The dungeon was carved a long time ago into the Mountains of Avarice. There are five levels. The first two consist of a narrow and winding passages which connect larger caverns. The first level is designed as a strange ecosystem while the second passage is where the The Void Pool can be found. The third is what appears to be the remains of some prince or king's abode that has long been abandoned, either willingly or by forcefully when the monsters arrived. Statues in the great hall heed warning to stay away for first time visitors:

"Beware Ye Who Enter These Halls!"
"Go no farther, lest ye face thy death!"

The fourth level is an old prison with cells for prisoners on both sides of a short corridor ultimately leading to the torture room. The fifth and the final level is near a subterranean lake where a lonely sorceress, Cora, leads hordes of her minions to all other parts of the dungeon on her worn.

Covetous monsters become stronger the deeper players travel into Levels 3 and 4 as well as the more Void Pool waves defeated. 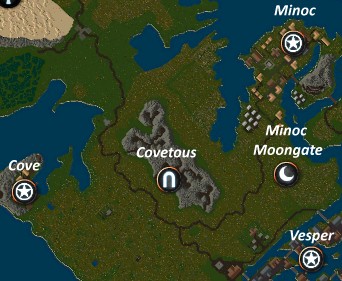 Covetous on the Atlas

The entrance of the dungeon is at 62º N, 83º E, which is located at northeast of Cove, south of Minoc, west of Vesper and just southwest of the Minoc Moongate. 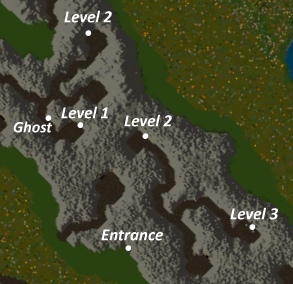 Mountains of Avarice - Outside Covetous

There are two passages outside of the dungeon: one between the first and the second levels and the other between the second and the third levels. The Ghost of Frederic Smithson, a quest NPC, can be found at the first passage just near the exit of the first level. In the latter passage and just near the exit of the second level, there is a Sacrificial Brazier which you can sacrifice a Treasure or a World Map to get a new map with the location of the Corgul the Soulbinder's Island of the Soulbinder marked. Skeletons also spawn in this passage. Note that you can Mark and Recall in between each level for quicker access. 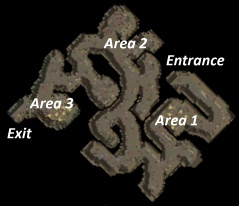 Map of the first level of the dungeon Covetous

This level is the first cave passage designed as a strange ecosystem where several creatures spawn in three areas:

With the exception of the Strange Gazers, creatures in this level are not hostile towards players. Headless Miners frequently mine regular gem pieces which can be picked up from the cavern floor. Headless Miners and Strange Gazers are left by an "unethical" necromancer during a mining operation who hasn't been seen since Cora and Vela came to the dungeon.

The Dazzled Harpies are attracted to gems: they pick up the nearby gems and become hypnotized by it for a short while. They are also the unsuspecting preys of the Vampire Mongbats, who use different methods (from leeching hit points to hiding) to catch the Dazzled Harpies.

There are several switches in this level whose use is yet to be found.

Map of the second level of the dungeon Covetous

Regular spawn does not occur on this level. Instead, players must defend the Void Pool from Cora the Sorceress's minions. Cora will invade the dungeon with endless waves of monsters, each wave being both tougher and faster than the previous ones. These minions appear from one of the following groups in this order: Abyss, Repond, Undead, Reptile, Elemental.

Cora's minions do not drop loot and instead players score points for making kills or assisting in making kills. The total and the current scores can be seen by selecting The Void Pool option from the character's context menu. Reward points can be redeemed by visiting Vela the Sorceress in Cove for Covetous Void Pool rewards. 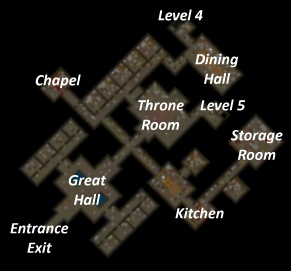 Map of the third level of the dungeon Covetous

The third level can be reached by following the passage to the east and finally to a carved stone entrance. 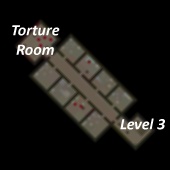 Map of the fourth level of the dungeon Covetous

A single group from Cora's minions spawn in this area which looks like an old prison with a torture chamber at the end of a long corridor. 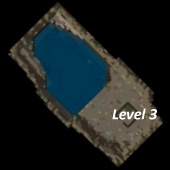 Map of the fifth level of the dungeon Covetous

Cora the Sorceress stands where once a powerful dragon called Sudiva was admired by the adventurers and especially the fishers who used to visit the subterranean lake on this level. Cora's story is released with Publish 76 as:

"When she was denied advanced knowledge of mana by the Codex of Infinite Wisdom, the sorceress Cora became enraged. In her pique, she poured all of her enormous energy into a magical spell and focused it onto the Codex. Despite the sheer power of the Codex, she wrested a few pages from its binding.

The far end of the hole erupted into the middle of Dungeon Covetous. Injured, and with her own ability to channel mana damaged, Cora retreated deeper into the dungeon. Over time, she recovered, and now sends minions enhanced by magic to attempt to capture more pages of knowledge from within the Void Pool.

Use of travel spells near the Void Pool in Covetous is impossible because of the twist in space, so Cora must gate her minions into the dungeon from a distance."