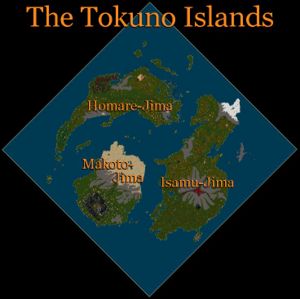 The Tokuno Islands are a facet that consists of 3 named islands and several small, unnamed ones. The 3 main islands are: Isamu, Makoto, and Homare. They are all accessible via their own Moongate.

The facet follows the basic Trammel rules set, meaning that there is no non-consensual PvP combat. Use of the transportation spells Sacred Journey, Recall, and Gate Travel is unrestricted in Tokuno except in the dungeons.

There is only one city in this facet, Zento.

Official fiction holds that the Tokuno Islands are currently governed by a hereditary monarch called an Emperor of Empress, and that Tokuno is the same map known in the single-player Ultima games as "The Land of the Feudal Lords."