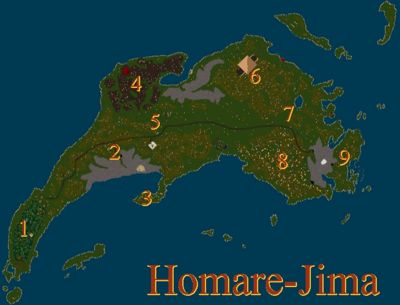 Introduced in 2004, Homare-Jima is an island in the Tokuno Islands group. Accessible by moongate, the island is inhabited by many creatures from Asian mythos. Limited housing makes Homare a little less crowded than the other Tokuno locales.

Homare-Jima has a distinctive road, which begins at Crane Marsh and ends in Kitsune Woods. Look for the small Zen Maze and the Homare-Jima Shrine to honor, both are located near the middle of the island. There are also many small islands that are accessible only by boat.

The Crane Marsh is a vast swamp located on the south end of the island. There is a small Lizardman village and other creatures. The houses in ruin suggest that the place was inhabited before.

The Yomotsu Mines are a dungeon. Built and inhabited by a hostile humanoid race, the Yomotsu, the mine are well known because they are the spawn location for the famous Fire Beetle, upon which you can smelt metal ore.

Given the name, it is not surprising that the mysterious ruins are inhabited by Rai-Ju.

Field of Echoes is a massive dead forest in the west of the island, which ends in peninsula. It is filled with the Living Dead. Look for the ruins, as this place was once very different.

The Bushido Dojo consists of a single room, but it is practically the only building on the island. This is not your neighborhood training facility, as it is inhabited by the many samurai and ninjas that have been corrupted by evil.

The largest lake in the area is also the home of the hated Yamandon. However, south of the lake is a good place to farm Tsuki Wolves for bones.

Kitsune is Japanese for fox, which makes this Fox Woods - for the were-foxes found within. This area is densely forested and difficult to navigate at speed. It is through this area that two mountain tunnels can be found to the plain of Sho Toh.

Sho Toh is a small plain at the northeast end of the island. It is cut off from the rest of the area by a mountain. It can be accessed through a cave that runs through this mountain.

Revenant-Jima is the large island off of the north coast of Homare-Jima.