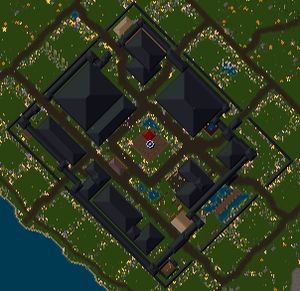 Zento is the only city on the Tokuno Islands facet. It has most of the major shops, and some player housing immediately outside of its walls.

Accessed via the Makoto-Jima Moongate, Zento is, obviously, located on Makoto-Jima island, the smallest of the Tokuno named islands. Zento is an imperial city, as evidenced by the presence of an Imperial Minister of Trade within the Rockuon Cultural Center. Home to peasants and nobles, samurai and beggars, Zento is a typical, if picturesque, large city.

Zento is a walled city. The inner buildings are surrounded by a double wooden wall that is bound with strap iron. There is also an outer, stone wall that encompasses gardens, the moongate, and the inner walled city. Wide, packed dirt roads connect the buildings. Zento contains a mixture of minka, or free-standing houses, and nagaya, or row-houses.

A dock is also built on the south side of the city with the High Seas booster pack, making the city more desirable for able seaman.