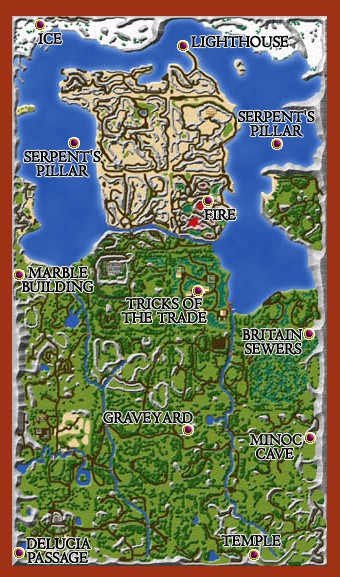 The Lost Lands is a continental landmass that was added to the gameplay area by UO's first expansion in 1998.

The entrances to the lands were uncovered, or in some instances activated, as a result of geologic activity produced from the use of the Armageddon spell, which was cast by the Followers of Armageddon, also known as the Zog Cabal. The first Britannian expedition to the Lost Lands was led by Crawworth.

Some entrances require the utterance of magic words: "recdu" and "recsu."

There are slight differences between the Trammel and Felucca facets of the Lost Lands.

There are 2 cities, a single dungeon, and a vast open countryside.

Papua is a small town of grass huts closer to the center of the map. NPC vendors include:

In addition to the locations listed above, the Felucca Lost Lands has Champion Spawns and the dungeon Khaldun.

It is not clear if the cities of the Lost Lands are part of Britannia proper (meaning if the are ruled by the Crown and the Britannian Council) or not.