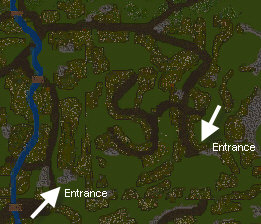 From Felucca Papua, head South, and continue below Hoppers Bog. There are two entrances to this Dungeon, both in a remote area of the Lost Lands.

The Story of Khaldun is the story of a lost expedition. It was the goal of four explorers to discover the secrets of the lost tomb of Khal Ankur. Khal Ankur whose cult worshipped death. It was said that his Zealots sealed themselves within the tomb upon their masters death.

The four explorers: Tavara Sewel, Morg Bergen, Grimmoch Drummel, and Lysander Gathenwale, along with a large group of hired help,dug and scraped their way into the enormous tomb.

Once inside the main antechamber, things slowly began to decay. Evil beset the company. Strange monsters attacked and then departed. Much like the wind swept echoes that moved through the winding tunnels. Lysander fell. Taken by what was inside. Barricades were built and the entrance blocked off. Grimmoch Drummel wrote in the final days: The fighting never ceases... the blood never stops flowing, like a river through the bloated corpses of the dead. And yet there are still more. Always more, with the red fire gleaming in their eyes. My arm aches, I'v taken to the sword as my bow seems to do little good... the dull ache in my arm... so many swings, cleaving a mountain of decaying flesh...'

And so they fell, the four that began this journey, as well as their workers. All of them cursed to wander the great halls of Khaldun forever.

Three of the four leaders of the expedition kept a journal of this ordeal. Bits and pieces of their writings can be found littered on the floor of the dungeon. Other parts of the diaries can be found on their corpses, if you are fortunate enough to dispatch them before they dispatch you. The complete story can be read at: Journals of Khaldun.

Khaldun and its surrounding areas do not allow the use of recalls, gates, sacred journeys, or any teleportation type spells. It also restricts the resurrection abilities of all characters. Once dead, you will have to zone out. As of the time of this writing, once you zone out as a GHOST you are randomly teleported to a shrine. So be prepared to go through the headaches of ressing at a shrine, and then walking all the way back to the entrance of Khaldun to rejoin your mates. So you cannot even park a resser outside the dungeon. 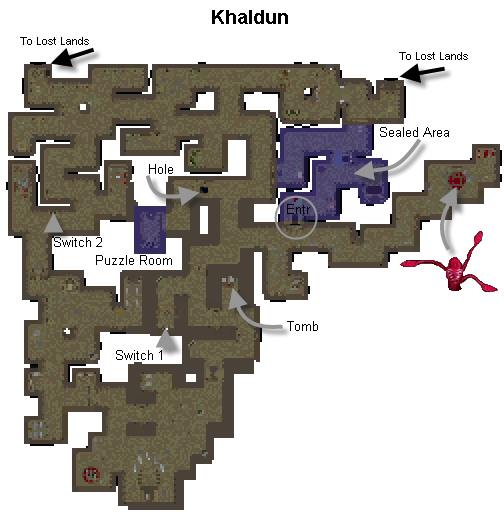 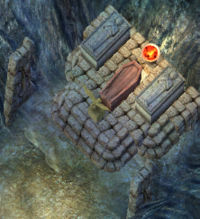 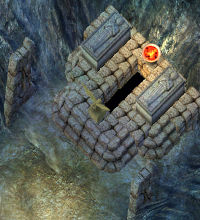 Deep in the Dungeon, on raised stone work, is the tomb of presumably Khal Ankur. When you first arrive, you will likely find a dark hole. Double click the statue, and a loud rumble will begin. Slowly a coffin will raise. With it an inscription: For he who walks the path of darkness. All is revealed. No other purpose ingame for the coffin is known. 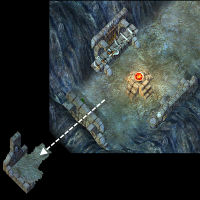 Switch 1 behind the wall 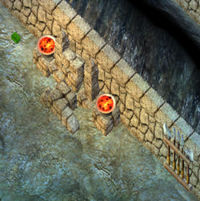 Switch 2 Look between the braizers

There is a multi room area sealed by walls in the dungeon. Entrance to this area is by finding 2 hidden levers, located some distance away.

The first switch is through a secret entrance, in a central room. Walk through the South wall depicted. You will find yourself in a short passage. Activate the lever by double clicking. This will cause a far away stone to raise, and reveal switch 2. (See map.) You will have to move very quickly to catch the second switch. You will probably need two people.

Once the second switch is activated, you will hear a rumble. Far away a wall section of the sealed area will raise. It will remain open for a few minutes. Long enough (perhaps) for you to make your way there. Inside the sealed room Zealots of Khaldun reside. Exit from this area is by walking across one of the patterns on the floor. You will be transported to a matching pattern elsewhere inside the dungeon.

Shortcut: The second switch can be activated without using the first, by using the "circle of transparency" found on your UI. This will show its location behind the wall. If not, activate your object handles, and double click that. (Default: Ctrl Shift in KR) Run don't walk, to the sealed chamber. 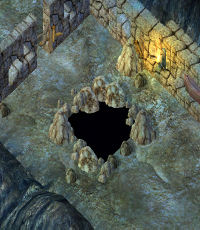 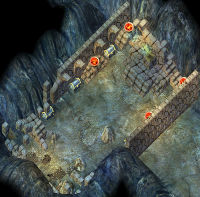 Another sealed room is found near the center of the dungeon. Entry into that room is via a large black hole in the ground. Stand on or near the black, and double click it. You will be transported to the room. This room is normally empty of spawn. Inside you will find locked Treasure Chests, that require you to solve a puzzle to open. 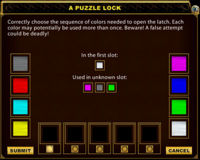 Unique to Khaldun are the puzzle locks found on the treasure chests. To solve the puzzle you have to place 5 colors into a proper sequence. Once done, the chest will open. If you fail a large trap will be set off.

There are 8 eight colors to fill the five slots. The same color can be used more than once. You will receive clues based on your skill in the Lockpicking skill. The higher the skill, the better the hints. At 100 skill, you will receive 3 of the correct colors, and one correct position. You will be allowed to try several times. (If you are still standing.)

For a short time for Halloween 2008 with Publish 56, a mirror of Khaldun appeared in Trammel in the Lost Lands as part of the Halloween 2008 Quest, culminating in a confrontation with Sicarii and the opportunity to create A Spiderweb Deed.