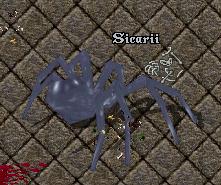 She is the hidden entity you are seeking during the Halloween 2008 Quest. After reading about her in Leoric's journal in his burned house, you head to Khaldun and stand on the abattoir surrounded by 5 candles. Saying her name teleports you into the lair she resides.

She shares the same abilities as the champion Mephitis. Plus she spawns cocoons which if left alone will unleash Dread Spiders. You can destroy the cocoon before that happens by using a bladed item on it. There are no detailed statistics on her because Animal Lore does not work. She is very tough and should not be taken lightly.

Upon her defeat you receive a Venom Sac and a Spinneret that can make A Spiderweb Deed with 10 collected Gossamers. The sac of venom is used to destroy Skull Totems found in graveyards.