Bedlam is a dungeon in Malas introduced with the Mondain's Legacy expansion. It can be entered by double-clicking the Iron Maiden standing up against the north wall in the healer's shop in the city of Umbra.

The fiction of Bedlam seems to be that it is a disused academy of Necromancy, largely taken over by the Undead and necromantic constructs such as the Grizzle. Its Peerless is the Monstrous Interred Grizzle.

Entrance from Umbra (21° 08 N, 52° 22 E). Invitation Only: start the quest chain Mistaken Identity given out by Aernya Mistress of Admissions who can be found near the entrance. 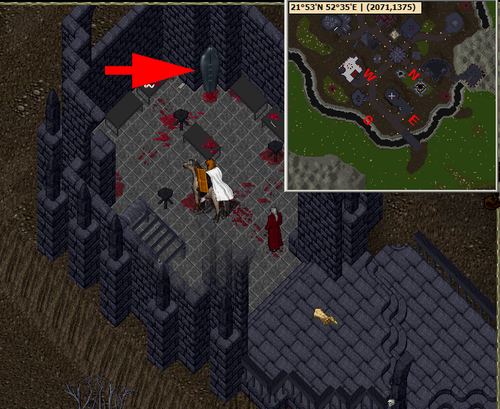 Bedlam Enterance
In order to enter Bedlam, you first need to start the quest chain Mistaken Identity by talking to Aernya Mistress of Admissions who can be found near the entrance. As the quest progresses, Not Quite That Easy quest of the quest chain will lead you to talk to Master Gnosos the Necromancer found inside Bedlam.

The first level of Bedlam.

Some of the creatures that can be found on this level are:

The Red Death is one of the creatures you must kill as part of the Tuition Reimbursement quest. On its corpse you will also find Resolve's Bridle which can be returned to Kia the Student in a separate quest. The Red Death is a powerful magic user and runs very fast. It is not very difficult to kill however. A single mage can wear it down over a space of time, or it can be killed very quickly by a group of 3 players.

There is a peerless monster which can be summoned in Bedlam. It is called the Monstrous Interred Grizzle. By talking to Master Cohenn the Librarian you can start the quest for the Librarian's Key, which can be used to gain access to the Grizzle for your party of adventurers.

The keys to the Bedlam Peerless are Disintegrating Thesis Notes. They look like mage spell scrolls

. Like all Peerless keys, they have a timer but their timer is far shorter than average for Peerless Keys. There are 5 thesis notes and they are found on any Named Undead in Bedlam, except for Red Death. These named undead are difficult to defeat, but have good loot and are rumored to have great chances at dropping the higher end set pieces.

It is common for this peerless to take so long to find the 5th note that, by the time you do, the 1st might have already decayed. The notes are exchanged for the Librarian's Key

via Master Cohenn's quest, called Misplaced. The reward for that quest, the Librarian's Key, is what's used to enter the Peerless Room.

The Peerless, the Monstrous Interred Grizzle, is of moderate difficulty. Like its younger cousins found at the Palace of Paroxysmus and at the Bedlam Crypt Champ Spawn (see below) it destroys equipment with an "infernal ooze" (Does massive damage to equipment until its durability is in the single digits, then does normal equipment damage.)

Mages should rely on the Earthquake spell and Summon Earth Elementals. Dexers can fight it, but it is very difficult and involves a lot of jousting. Be sure to not charge right through the puddles of infernal ooze. You will die.

Pets can do pretty well. Most Tamers that I've seen use Cu Sidhes against it, and tend to rely upon the Greater Heal spell rather than the Veterinary skill. This is probably because standing next to the pet and healing it from there is a very good way to get hit by the infernal ooze and die.

In the way of special loot, the Grizzle spawns the Grizzled Mare (a Hellsteed that bonds to you instantly), the Grizzled Bones (See Peerless Ingredients), the Tombstone of the Damned (See Named and Peerless Loot), and a special Set of bone armor: the Monstrous Interred Grizzle Armor Set.

Red Death and the other named monsters are immune to the effects of Ethereal Voyage. Area Peace and Orange petals are quite useful. A well-trained Cu Sidhe is capable of killing any of the named monsters. However, the random spawn of assorted undead critters makes it somewhat challenging. The Tamer trick of standing on the same tile as your pet is less effective when the undead spellcasters use Necromancy area spells. Red Death is solo-able by a tamer with a Cu Sidhe and area peace. It is recommended to frequently use Gift of Renewal and Nature's Fury to take some of the heat off your pet. If you are targeted by an overwhelming number of monsters, run for the exit and re-enter the dungeon and try not to move: occasionally, the monsters act as though they cannot see you for several moments, usually enough for you to regain control. Don't be fooled by the cemetery gate. The named monsters on the other side of that fence can open in, teleport past it, or cast on you from inside.

The second level of this dungeon contains a Champion Spawn. Go to the graveyard west of the entrance and there is a tomb which takes you down stairs:

Physically, Ilhenir the Stained is kind of a Paragon Interred Grizzle. It looks similar, has that equipment attack and hits fairly hard.