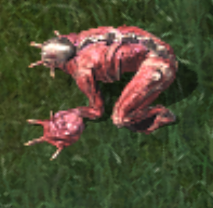 The Gore Fiend is the result of necromantic experiments gone wrong, dead flesh reborn in a form never meant to be. Similar in its magical creation to the Flesh Golem, the Gore Fiend has less physical strength to its unnatural cousin. It, too, lacks intelligence and possesses some resistance to the force that created it. Unlike the Flesh Golem, however, this creature’s strength is accompanied by the ability to lay waste to their foes with poison.