Several creatures spawn here which are very rarely seen anyplace else (if ever), including Devourers of Souls and Bone Daemons. Certain other more conventional monsters spawn here as well.

Doom is a two-level dungeon. Level Two, detailed below, is known as the Doom Gauntlet. The primary purpose of Level One, aside from the uniqueness of the dungeon and its inhabitants, is to obtain the key to the Doom Gauntlet. At the Gauntlet, several artifacts can be obtained.

Every creature on Level One spawns with Daemon Bones as loot. These are used in the quest The Summoning of Victoria the Sorceress, in order to obtain the key to the Doom Gauntlet.

Both levels of Doom also spawn certain artifacts that are obtainable using the stealing skill. These range in value from approximately 5,000 gold pieces to several million. The highest-end of the stealable artifacts are the Blade of the Righteous (which spawns in the Gauntlet, in the healer's room), the Inquisitor's Resolution (which spawns in level one), and the Ruined Painting (which spawns in the Gauntlet, in the hidden mage shop). The Zyronic Claw has been highly prized on some occasions, but appears to be primarily seen as a "show piece" of late.

Also known as Doom level 2, the Gauntlet was designed to be a grueling test of player strength. As a reward, adventurers could receive Rarity 11 artifacts for slaying its inhabitants.

The Doom Gauntlet is the area of the Dungeon Doom (which is located in Malas) across Lake Mortis, the body of water at the southern end of that dungeon. You get across the Lake by summoning Chyloth the Ferryman. Locate the Bell of the Dead on the shore line and double-click it to summon Chyloth. Before you summon him however, you should put everyone crossing into a single party. Everyone in the same party may cross together.

He may or may not appear a few seconds later. If Chyloth appears, he will ask for a Golden Skull as payment to cross the lake. You must take the Golden Skull and place it on his avatar. You and your party will then receive a confirmation menu asking if you wish to cross. Select OK to be teleported onto the ferry. Walk on the teleporter tile to cross.

If you fail to give Cythloth a Golden Skull, he will get very angry for wasting his time. After a few moments of waiting, he will cast Flamestrike and summon a Skeletal Dragon upon you. This can mean instant death some of the time. The dragon must be killed before he can be summoned again. If you ring the bell and he does not appear, find and kill the Skeletal Dragon.

The gauntlet area is divided into many smaller areas. After crossing the lake you arrive on the beach. Here you can also find the exit moongate. No other means is allowed to exit the area. 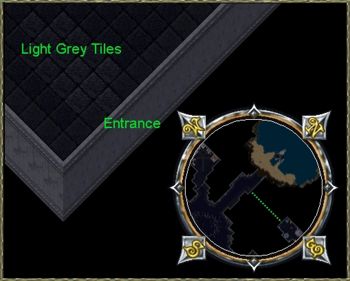 From the beach you enter a wide corridor. There is an NPC vendor on level 2. The entrance is hidden along the east wall. Most characters can locate the shop by walking close to the eastern wall. If you cannot locate the shop, look for the lighter gray tiles just before the first corner on the eastern corridor wall. After a harrowing walk in the abyss, you will end up in the high-priced shop. This shop is a relatively safe place to log out and is a convenient, but expensive, way to replenish supplies.

Continuing down the wide corridor lands you in a giant room, large enough to fit the city of Cove. In the center are 6 Pentagrams. They indicate what stage the gauntlet is at. However they are frequently broken and can not be relied upon. In this center area is where the Dark Fathers will spawn.

Besides the hall you entered through, there are 6 rooms that can be entered through the main area. Five of them contain the lesser boss monsters. One of them is a special healer area. The doors are locked and can only be entered as a ghost. The greedy resident healer will charge you 5,000 gold for his services.

Before the Dark Fathers will appear, the lesser bosses of the five adjoining rooms must be defeated. Starting with the east room and working clockwise, players must rid each one. A room is currently infested when the door turns red and can not be opened. You must step on the teleporter to enter. Beware though, for the only exit is through victory or death.

The number of bosses depends on the total number of players entering the room. As more step inside, a greater number of creatures will rise to the challenge. A small group of 8-12 players will face 2-4 bosses, while 25+ players could be dealing with 6 or more.

Each lesser boss kill has a chance to reward an artifact, however slightly lower than the chance of a Dark Father kill. 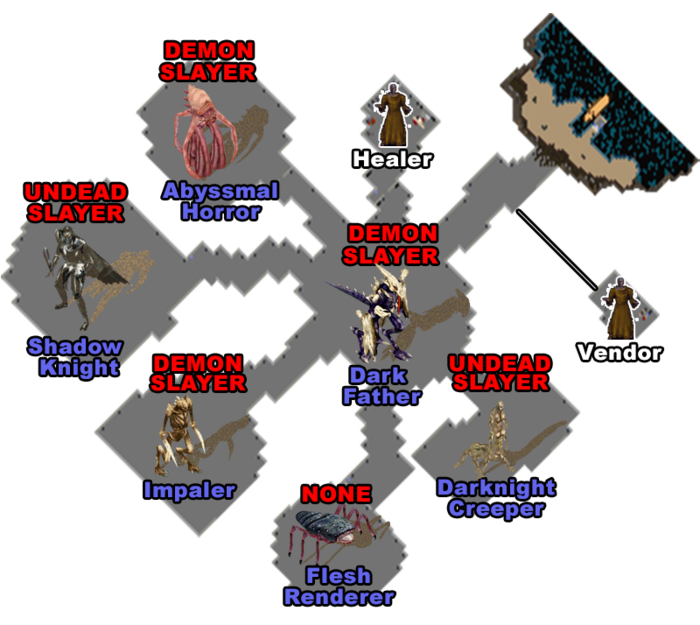 For detailed tactics on defeating each lesser boss, click on their name in the chart above and scroll to the tactics section.

After each Dark Father is slain you have a small chance to be rewarded with a powerful rarity 11 artifact. When all Dark Fathers are defeated the entire gauntlet resets back to the first room.

With the introduction of Doom, a new concept of Artifacts and Rarity were brought to UO. For the first time an item was officially created as a Rare and not simply a development mistake. Unlike normal monster loot or crafted runic items, artifacts can break Item Property limitations or even put properties on items where they would not normally be. For example the Spirit of the Totem has 15% Hit Chance Increase.

Artifacts spawn on the ground throughout all parts of the dungeon with a rarity between 1 and 12. The higher the rarity, the longer between respawns. For example, the rarity 1 Skull Candle respawns roughly every 30 minutes. The Ruined Painting which has the highest known rarity of 12, spawns once every 4 months. Some artifacts such as the Lamp Post require some special tricks to reach (see Doom lever puzzle).

When a rarity item is discovered you can acquire it with the Stealing skill. Stand next to the item and target it with stealing. You need a minimum of 100 skill to have any chance, but success could take hundreds of attempts. At 120 Stealing you rarely fail after 3 attempts.

All bosses located in the Gauntlet area have the chance to drop artifacts as loot. These are known as the Doom Boss Artifacts. They all have rarity 11 and some are considered to be the best equipment in all of Britannia. For example, the Ornament of the Magician is unrivaled with its 2 Faster Casting property.

Publish 48 has the most recent changes for this drop system. Players now accumulate points the same way they did during the Treasures of Tokuno event. Each lesser boss and Dark Father that you kill and personally (not through a Party) receive looting rights on will award you points. As you gain more points, your chances of getting an artifact increase. The more damage you do relative to other players will earn you more points. Having Luck also increases the amount of points you get.

Eventually you will be awarded one of the possible artifacts. It will be placed in your backpack (or Bank Box if overweight) along with a system message to the effect of “For your valor in combating the fallen creature, a special artifact has been bestowed upon you.” will inform you of the event. It is advisable to Insure it immediately.

The drop system has gone through two previous iterations. When first introduced, the artifacts simply dropped on the boss corpse. This was long before Corpse Instancing was implemented. So just anyone who got looting rights could grab the artifact. Illegal script looting was a huge concern. Lesser Bosses had a .1% chance of spawning an artifact. The Dark Fathers had about a 1% chance to do so. If the individual or party doing the most damage to the creature is wearing high luck, chances can increase to 1% and 3% respectively.

During Publish 48 the system was changed so if an artifact was awarded, it would be randomly dropped in the backpack of one of the 16 top damagers. This solved the scripting issues and helped more evenly distribute artifacts to all attackers.