Despise is one of the dungeons original to Ultima Online. It is considered an Anti-Virtue Dungeon. Despise is located at the sextant coordinates 47º N, 1º W. To get to the dungeon by foot, walk north from the Britain Cemetery and go left through the mountains. Not counting the entrance area, Despise has three levels.

The dungeon on this facet is revamped with Publish 78 and the associated fiction is released:

Two brothers, both well learned in the arcane arts, lusted for the same woman. She was but a simple maiden, tending to the ranches dotting Britannian countryside, her beauty, however, was without equal. Both men knew should they compete against one another, neither would succeed in bearing fruit with such beauty. So the brothers conspired, and began to corrupt the very fabric of her love. Together the brothers conjured a powerful Polymorph spell to transfigure themselves into the perfect man for the maiden to love. For months they would deceive her love, the maiden unknowingly accomplice to a corrupt triangle. Finally, she gave birth to twins. Despite the powerful magics the brothers used to pursue their ruse, the mother's love for her children was too great and the brother's trickery was uncovered. Outraged at such a thing the maiden cast away her lovers forever, cursing them to the Abyss. As the twins grew and their mother aged they would learn of her hate towards their fathers. As each twin grew to adulthood and became their own man, they would blame the other for their own father's fate, and come to despise one another. Already practiced in their fathers' art and fully possessing their arcane talent the twins began bartering with the mysterious Wisps. Eventually each convinced the Wisps to conjure an army with which to destroy the other. Their mother, bearing witness to this feud and knowing the dangers of the likely outcome, pleaded with her sons to reconcile. Corrupt with rage, there was no foregoing their anger and so she mediated at the Shrine of Compassion, hoping in her heart of hearts for her sons to end the feud. As she meditated a mysterious Wisp appeared to her and in an instant an eternal pact was struck. The mother's love was enough to save Britannia from impending war, but her sons, filled with despise would be cast there forever... 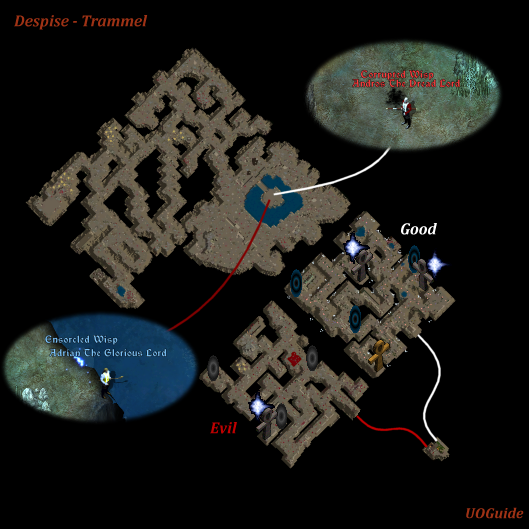 Despise - Trammel. Wisp Orbs can be obtained from the ankhs above.

The goal of this system is to train a single creature of your choice on either the Evil or the Good side of the dungeon and make the creature slay one of the twin brother and his follower Wisp in the final level. In order to train a creature, first you need to obtain a

Wisp Orb by double clicking on one of the ankhs inside the dungeon. If your character has a positive karma, you can only obtain the orb from the Good side. Likewise, if your character has a negative karma, you should use the ankh from the Evil side of the dungeon. Once you obtained the orb, you can control any creature, regardless of its side, by double-clicking on the orb and targeting the creature.

Your Alignment, Army Power, Controlled creature and its Anchor, Leash and Aggression can be seen from the Wisp Orb. You can also set the Leash length of the creature to Short or Long by double-clicking and targeting the orb.

Your possessed creature has achieved a new threshold in power!

You will also obtain

Putrid Hearts for every creature your controlled creature kills based on their power level. You can use them to obtain Dungeon Crystal Points of Despise which you spend with the Mysterious Wisp at the entrance of the dungeon on random Ephemeral magic items.

Your possessed creature has changed alignment! It may now become more powerful, and you may now add it to your army.

Once you trained your creature to a high level, you can Conscript it to the army of your alignment by using the Wisp Orb's context menu. The Army Power is the sum of squares of the power levels of all the conscripted controlled creatures on your alignment. The army whose power level is the highest will then be teleported to the final level of the dungeon:

The Call to Arms has sounded. The forces of your alignment are strong, and you have been called to battle! You will be teleported into the depths of the dungeon within 60 seconds to heed the Call to Arms, unless you release your conscripted creature or it dies.

In the final battle, the army will either fight against Adrian the Glorious Lord and his Ensorcled Wisp or Andros the Dread Lord and his Corrupted Wisp, depending on its alignment. The brothers can be found on the island inside the lake and they shielded from all attacks by players and only your controlled creature can damage them. If you die on this level, your ghost and your corpse will be teleported back to the side of your alignment. There is a chance for one of the Despise Artifacts to drop into your backpack upon killing Adrian or Andros.

The stairs going up from the entrance area is considered Level 1. It is chock full of Lizardmen. There are indications that it was once intended to contain a Champ Spawn. There is an escort quest on Level 1. Look for the ankhs, on each is a switch that when double-clicked, will transport you to the other ankh on Level 1. The switch works both ways. It should be noted that you cannot resurrect at either ankh.

Level 2 consists entirely of Ettins and Earth Elementals. There is a popular lockpicking destination just inside Level 2 and to the north.

Level 3 is a little more varied. It has Trolls, Ogres, Ogre Lords, Ettins, Titans, Cyclopean Warriors, and an Acid Elemental. On the Felucca facet, it also hosts a Champion Spawn: the Vermin Horde Champion Spawn with Barracoon the Piper as its resident champion.