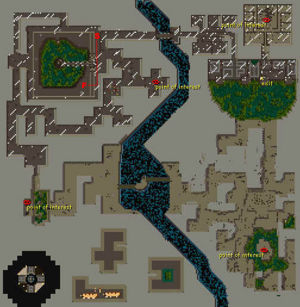 Terathan Keep, which was implemented with the The Second Age expansion, is a Lost Lands war zone, dungeon, and Felucca Champion Spawn location. The war is between the Ophidian attackers, who hold the areas surrounding the entrance and a portion of the southern part of the Keep, and the Terathan defenders. The war between the races has been a major influence on the Lost Lands. The age old struggle is depicted in the flagstones of Delucia.

Home to the Arachnid Champ Spawn, the Keep is usually accessed via Papua. However, Fire Dungeon offers a quick way into the Champ Spawn area. The monster spawn is rather heavy around and in the Keep.