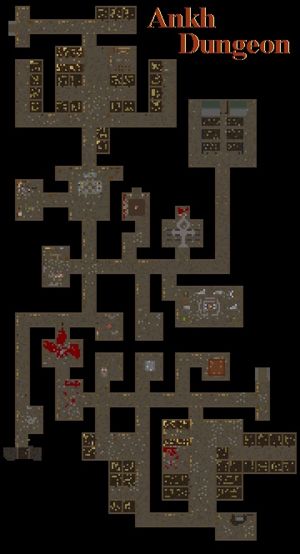 The Ankh Dungeon, also known as Central Dungeon, is a medium-sized, single-level dungeon complex that is located on facet Ilshenar. It is located roughly equidistant from the Humility and Honesty moongates; from Honesty take the northern passage to the Burned Forest and head northwest; from Humility head east by southeast, just skirting to the north of the swamp of Nox Tereg.

Ankh dungeon is notable if only because of its four access points, the: Abandoned Tower, Ki-Rin Passage, Ruined Tower, and Serpentine Passage. Adjacent to both the Abandoned Tower and Ki-Rin entrances are sparkling items that have the power to raise the dead. In the former case it is a fountain and in the later, a walnut tree.

A long abandoned fortress, this place is now the haunt of the living dead and demonic forces. Inside are stables, jails, laboratories, kitchens, and even its own graveyard. There are numerous interesting items in Ankh dungeon, including unstealable ruined paintings and a pig's head on a tray.

East of the entrance to the Ki-Rin Passage is a sparkling walnut tree that has the power to raise the dead.

The Ruined Tower entrance opens in the very north of the dungeon.