Defined as the quality of being truthful, sincere, or frank, but above all, free from deceit or fraud, in UO, Honesty is:

Honesty is one of eight virtues found within Ultima's Virtue System, and the sixth to become active. The virtue is represented on the Virtue Gump as an open palm which will turn blue to indicate your current level of achievement.

Honesty became an active virtue as of Publish 72. Prior to its induction, honesty existed through such items as the Transparent Heart and the Gorget of Honesty.

The benefit of Honesty is a discount on items bought from NPC merchants. The higher your rank, the more you'll save. The discount will not appear in the merchant window itself, but as a system message following the completed transaction. The discount is based on the total of each sale. 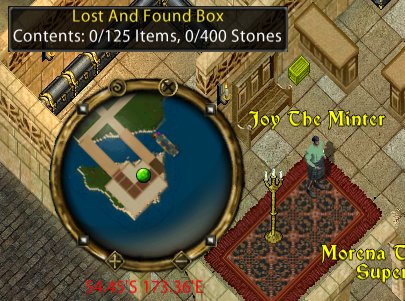 Gaining in the Virtue of Honesty is accomplished by acquiring and returning items which read: "Lost Item (Return To Gain Honesty)." The items spawn on the ground in both Trammel and Felucca but they never spawn within dungeons or guard zones. Once you pick-up a lost item you have three hours to find its owner, after which the item will lose its "lost" tag:

You have three hours to turn this item in for Honesty credit, otherwise it will cease to be a quest item.

"Lost" items can be returned to any of the Virtue Towns (Britain, Yew, Moonglow, Trinsic, Skara Brae, New Magincia, Jhelom and Minoc) for Honesty credit. If the owner of the lost item happens to hail from a particular city you will get double credit for turning the item into that city, whereas a turn-in to the actual owner will yield quadruple credit.

Note that if you find an item in Trammel, you will find the owner in a Trammel city, not the Felucca version, and vice versa. Keep this in mind if you are having trouble finding the owner of a object.

Each town features a special lost and found box located within a bank. To use the lost and found system you simply drop a lost item onto the box. In order to find the specific city in which the item should be returned, or better yet, the specific owner, you will need to use Forensic Evaluation on the item.

The process of gaining Honesty without forensic evaluation is very slow. For example, sixteen items returned to the exact NPC, or 64 non-specific city drops, resulted in a total of only three Honesty bubbles filled (Frarc). The spawn rate, as well as the random nature of the lost items, are other factors which make Honesty one of the tougher virtues to practice. 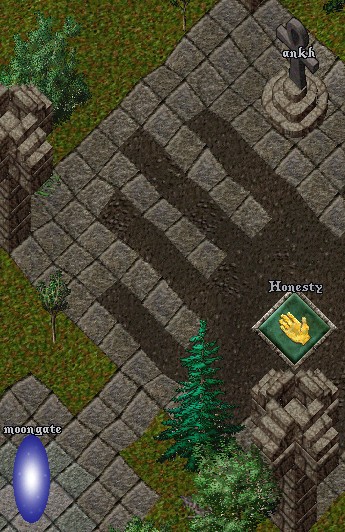 The Honesty Moogate leads to and from the mid-southern edge of Ilshenar (22°40'N 42°15'W). It is close to the following features: 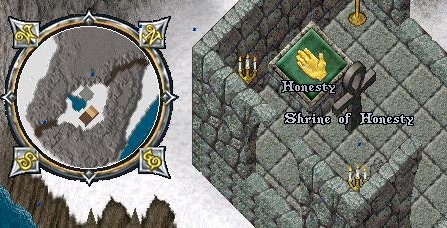 The Honesty Shrine (93°9'N 156°57'W) is a named ankh that is located on Dagger Isle, which is best known for being the home to the dungeon Deceit. The shrine is not adjacent to a moongate.

According to Ultima V, honesty is scrupulous respect for truth - the willingness never to deceive oneself or another.