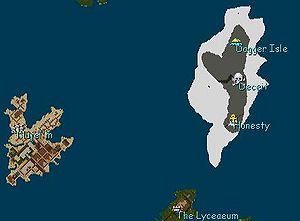 Dagger Isle is a large island located north of Verity Isle (the island Moonglow is on). It is often refereed to as Ice Island because of its snowy environs. Coordinates: 103° 59'N 164° 3'W (dungeon entrance).

The most prominent features of Dagger Isle are the dungeon Deceit and the Shrine of Honesty (see Virtue). It is also known for its large housing area, as a place for tamers to train, and where tanners collect hides.

It is best reached by rune and Recall, Gate Travel, or Sacred Journey spells. However, if traveling by sea, travel due north from the northern Verity coast.