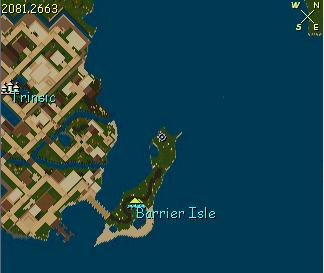 Barrier Isle is a suburban island of Trinsic located directly east of the city on the Trammel and Felucca facets. The island has two small plots for player homes at its south end. Coordinates: 95° 42'S 55° 37'E (island center)

The isle is home to gypsies and brigands alike. It is a favorite place to find escort quests and hides. Additionally, several wandering healers reside on the island. A guard zone covers the northern part of the isle and the area next to the bridge to Trinsic.