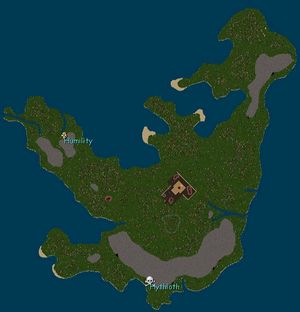 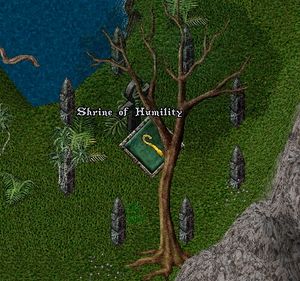 Fire Island, or Isle of the Avatar, is the furthest South of all of the landmasses of Trammel and Felucca. Hot and fetid, the jungle island is home to the dungeon of Hythloth, the Shrine of Humility, and the Fire Temple. There are active volcanic vents on the surface of this island. Nonetheless, it is a popular location for housing. Coordinates: 170°35' S, 130°5' W (center of isle).

Surface inhabitants include all of the normal jungle fauna. Giant Spiders, Demons, Dragons, Drakes, Solen Warriors and Workers have routinely been seen in all parts of the island. A higher concentration is often found around the Fire Temple.

Frankly, it is best reached by rune and Recall, Gate Travel, or Sacred Journey spells. However, if traveling by sea, Fire Island is South of Haven Island on the Trammel facet (Ocllo Island on Felucca facet). It should be noted that Magincia is not much further away than either Haven Island or Ocllo Island.