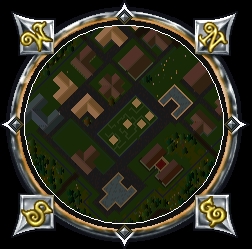 Moonglow is found on the southern tip of Verity Isle, which was named to reflect the objective intellectual pursuits of the city's populace. Although the buildings were designed and constructed by the architects and masons from mainland Britannia, the overall appearance of the city is one of function over form. Buildings are sturdy and devoid of superfluous accouterments. The streets are narrow, but straightforward and well-connected. In many ways, the city looks like one large campus, with the Lycaeum as the central college.

Much of the study that goes on in Moonglow, and especially at the Lycaeum, is of the arcane arts. Nearly every form of sorcery, enchantment and potion is studied here, and most of the realm's research into new magic is performed here. Almost every great wizard interested in enhancing his or her personal abilities, or in increasing Britannia's pool of abilities, has spent at least a few months within the walls of the Lycaeum.

Not wanting to worry about inconveniences of daily life, the residents of Moonglow have worked hard to ensure they have every contemporary labor-saving device and invention known to the realm. Although nearly all is imported, the keen minds quickly dissect and analyze the latest gadgets, as their understanding of technology is usually quite strong.