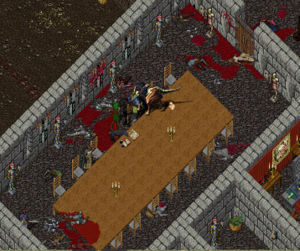 The Britannian Council is a term referring to the group of people who were appointed to rule in Lord British's absence. It was rarely seen on-stage, but was typically said to include a character played by each shard's Event Moderator (until the Event Moderator program was ended), as well as traditional Ultima NPCs such as Dupre and Clanin.

It was interchangeably also been called the High Council, Ruling Council and Royal Council.

Regardless of the name, during the Summer of 2008 it was wiped out in a single, savage assault known as the Royal Council Massacre as part of the Hope for the Future chapter of the Warriors of Destiny event saga. Its remnants or a successor group, it is not clear which, appointed Casca to the throne as "King Pro Tempere" ("Temporary King"), thus indirectly setting up one of the greatest evils Britannia has ever known.