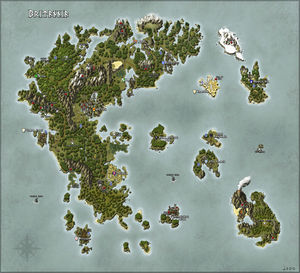 Map of Britannia by Ashlynn of Chesapeake.

The term Britannia is, in UO, often used incorrectly as a synonym with Sosaria‎.

Properly, however, it refers to the original UO map, the one with the cities of Trinsic, Britain, and Yew; the Kingdom created by Lord British's consolidations of the realms found in the single-player game Ultima I (see Ultima Prime).

Originally, Britannia was under the political control of Lord British and his government. Then, the Lost Lands were discovered, and thus a map was introduced that had very, very little to do with Lord British. Then, to add to the confusion, the split between Trammel and Felucca occurred, leaving us with 4 distinct maps:

The first (Britannia, Trammel) is under the control of the provisional government of Britannia since Queen Dawn passed away. (Sometimes, player houses in the Facet of Malas are referred to as "colonies" of Britannia, though any control the Britannian government has over these areas seems slight at best.)

The second and fourth (The Lost Lands in both facets) are really not controlled by anyone, though presumably town governments exist in Delucia and Papua, the 2 cities found in the Lost Lands. Whether or not those cities are under the dominion of Britannia is not clear, and is sometimes the subject of role-played player conflicts.

The third (Britannia, Felucca) is under the control of whatever the dominant Faction is.

Britannia and The Lost Lands are located on a planet that is sometimes called Sosaria. Whether or not the other maps are located on that planet is not clear and is subject to dispute. Some might be (Tokuno), some definitely are not (Malas and Ter Mur).