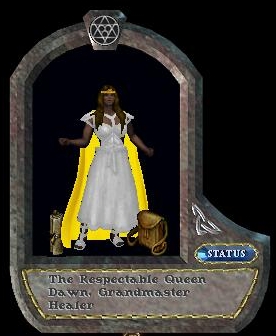 Dawn is an NPC, who was introduced with the Lord Blackthorn's Revenge expansion. She was a great warrior and great follower of Virtue, and her career eventually led to her being crowned Queen, just before the release of the Stygian Abyss expansion, many years after her original appearance. She died tragically during the In the Shadow of Virtue event cycle.

Dawn was a native of the City of Yew. Her parents died when she was young, and she was raised by her Grandfather, a retired Knight of the Realm who schooled her in the arts of combat and in the ways of Virtue.

She fought in the wars against the Juka, who had been manipulated by Blackthorn into attacking Britannia. In a battle in Yew, she caught the attention of Dupre, who effectively recruited her into the "inner circle" that advised the leaders of the realm in the absence of Lord British, and became a "Royal Knight" (a new name for the Order of the Silver Serpent). (Presumably, these rulers were the same people who would later become known as the Royal Council).

Though Dawn was at first suspicious of the Meer, who followed the Juka through time to help us fight them, the machine Blackthorn, and Exodus, she eventually became friends with the Meer girl Dasha. Dasha and Dawn shared the experience of losing their homes.

Dawn later had the distinct honor of landing the killing blow on the machine Blackthorn when he and his minions invaded Yew, shortly after the release of the Age of Shadows expansion. For her efforts she was rewarded with Dawn's Music Box. Some state that she was named a "regent" of the realm at some point, but no links from UO's official Internet site could be located to confirm that.

It was later revealed with the fiction The Awakening - Act VII that Exodus constructed a "facsimile" that took place of Blackthorn instead.

After these events, Dawn just....vanished from the Britannian stage.

For the most part, during her "first run," she can fairly be said to have never "caught on" with players, and most of the UO dev team seemed to be annoyed by her. Thus, her whereabouts were officially unknown for a long time following the Blackthorn attack, until a dev team member once commented off-handedly that she had married and retired quietly to Yew. And this, though perhaps unintended, became part of Dawn's lore. It was later revealed that her husband's name was Ors, and that he was a strong but simple fellow, inclined to be trusting, and fiercely loyal.

Publish 59 saw Dawn emerging from her self-imposed early retirement to help Britannians fight off the Shadowlords and depose Casca, the false king. (See Warriors of Destiny and The Last in Line.) She was played in-game by the Event Moderators of the various Shards. Along with Sherry the Mouse, she was one of the last links to the Lord British regime. Casca thus saw her as a threat, and attempted to kill her by burning her house down. He failed, and Dawn ended up joining, and then leading the gathering resistance against Casca.

This incarnation of Dawn appeared to have more personality than the earlier incarnation, and can fairly be said to have acquired more of a following among UO's player base. Her personality change can, storyline-wise, be attributed to her increased age and growth as a person. She was no longer the young girl we once knew, with few experiences besides training, a few big battles, and a role she was thrust into rather than earned. Instead, she was a young lady, smarter and shaped by more ordinary life experiences.

Out-of-character-wise, her personality change can be attributed to the RolePlaying skills of the various Event Moderators, and that she had more on-stage time than the earlier incarnation.

Dawn played a key role in the concluding events of the event cycle, including participating in the direct battle against the Shadowlords that took place at the Fire Temple, the final fight against the Crimson Dragons which took place in Felucca, and finally being the one to kill Casca by destroying the magic, Shadowlord-powered gemstone that gave him life. Casca thus became the second major villain to be slain, directly, by Dawn.

Following the conclusion of the Warriors of Destiny event cycle, Dawn was crowned Queen of Britannia. In the political confusion that often follows such catastrophic events, it is difficult to say who crowned her, exactly, but not many people seemed to care. Some stability in the realm was needed, and Dawn was both qualified and willing. 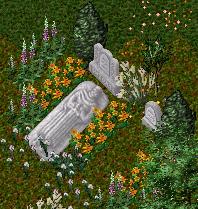 Events during the In the Shadow of Virtue tested Dawn's abilities as Queen and, it must be said, she did not always come off as well as her subjects would like. She made a tactical error in placing the Crystal of Duplicity on display in the Throne Room, and her husband Ors was taken by the enemy Bane Chosen.

In order to destroy the daemon Virtuebane, Dawn visited the Shrine of Humility, following Queen Zhah's advice to bless her sword. She was killed by her husband Ors, who was under the influence of the Virtuebane and his mind was being manipulated by him at the time.

On most shards, Ors committed suicide shortly after using the very same dagger he stabbed Dawn.

A memorial service is held on all shards which is interrupted at one point by the daemon Virtuebane. Queen Dawn is buried in her hometown of Yew. A statuette named

In Memory of Dawn the Valiant is crafted after her tragic death.