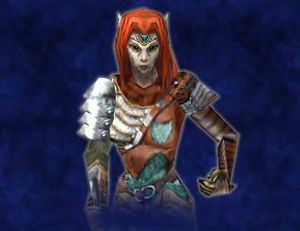 A Meer Captain
from http://www.uolbr.com

The Meer are an ancient race of sentient, cat-like humanoids that are indigenous to Ilshenar. They are long-lived; a Meer of less than 200 years of age is still considered young. Like the pixies that inhabit the surrounding woods, the Meer are a good-aligned race that will attack characters with negative Karma. The Meer practice a form of ancestor worship and believe in reincarnation.


In the BNN: Enemies and Allies article of April 11, 2002, Dupre described the Meer as, "[V]ery private. Very proud. Unlike the Juka, they don't mean us any harm, although I don't believe they will be throwing us any festivals." For a detailed history of the Meer, see Britannia News Network articles from November 19, 2001 through May 30, 2002.

The Catacombs are where the entire race slept while they awaited the return of their ancient enemy, the Juka. It is accessed by stepping on a platform in the middle of the grassy plains of Central Ilshenar.

North of the Sacrifice Shrine Moongate lies the Meer town of Lakeshire. While there are shops and inns, there are no NPC vendors in Lakeshire. (However, there is a Gypsy banker located on the road north of town along the road, and to the southeast in a little clearing off the road into the forest.)

The Meer are powerful magicians. They are best known for casting a very powerful spell that went awry. As described by the Meer Adranath, "In the past we used the Decay only in times of great need when such a dark use of nature was the only option we could see for survival. The spell would seize our enemies and rot them into the soil within moments. Entire legions of Juka could be reduced to nothing. The Decay is a horrible act of destruction that forces nature to do its darkest work." [1]

While battling the Juka near Yew, the Meer cast the Decay spell but the Juka were unaffected. It turned out that the nature of the world had changed during the Meer’s long sleep. Through the ages, evil had forced nature to change and adapt in unnatural ways, which skewed the Decay spell into something much more powerful and evil. The spell created plant beasts and sentient insects.