Blackthorn is an important NPC in the history of Ultima Online. He was a friend and ally of Lord British. The two maintained their friendship even after Blackthorn founded the philosophy of Chaos to counter the dominance of Lord British's Virtues. While their followers sometimes slaughtered one another in the streets (through the Chaos and Order system, now defunct), British and Blackthorn continued to play chess and debate philosophy.

However, when he did not immediately ascend to the throne upon British's first absence, Blackthorn became bitter and resentful. Despite the tolerance and egalitarian sentiments of Chaos, at heart Blackthorn was an aristocrat, and thought, simply by right of noble birth, that he should have the throne until British returned. He is crowned as the King of Britannia at the end of The Awakening event arc.

His name is very often misspelled to "Blackthorne" but "Blackthorn" is the proper spelling. 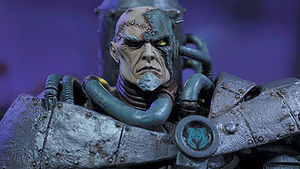 He is thought to have succumbed to the temptations of the villain Exodus, and became true evil. He was also seen as half-human, half-machine monstrosity (with an obvious influence from the Borg from Star Trek), and the subject of a toy designed by Todd McFarlane, the noted comic book artist, that was included with the box for the Lord Blackthorn's Revenge expansion. (See the pages on the Gargoyle's Redemption, Blackthorn's Damnation, and Plague of Despair scenarios.)

The machine Blackthorn took up residence in Ilshenar. After growing impatient, and following Exodus's defeat, it launched an all-out attack on the City of Yew. During the fight, it was slain by Dawn. The machine Blackthorn's grave is found near his old castle in Britain on the Felucca facet.

At a memorial service for Blackthorn, Lord British stated that it was Blackthorn's death that caused his (temporary) return to Britannia. And further stated:

"My friend Lord Blackthorn is dead, and I am sorrowful at his passing. He became corrupted by great Evils, and now is no more. Though we were often at odds, the truth of his downfall wears upon my soul."

And also stated that, as a monument to Blackthorn's ideas, he was abandoning his goal of uniting the Shards, under the Virtues. Thus, Blackthorn effectively won the Chaos/Order wars.

On Felucca, Blackthorn's castle is still accessible, gathering dust, used occasionally for roleplayed villainy, and standing as a monument to how easily Chaos can become Pride. He also has a castle in Central Ilshenar (from when he turned evil).

Lord Blackthorn as the King of Britannia.

It was later revealed with the fiction The Awakening - Act VII that Exodus constructed a "facsimile" that took place of Blackthorn:

"Even know, the construction of your facsimile has begun. It will be you...with all the memories, stories, and ambitions you have told me...but stripped of this nobility and sense of compassion that you so disgustingly show. Even if it is defeated, it will forever tarnish your reputation, for daring to defy me...and will turn the people against each other. After all, if your precious King was so wrong about his friend, what else might he have been wrong about?" - Exodus

He appeared as The Mysterious Healer during the sixth act of the event cycle and crowned as the King of Britannia at the end of The Awakening event arc.