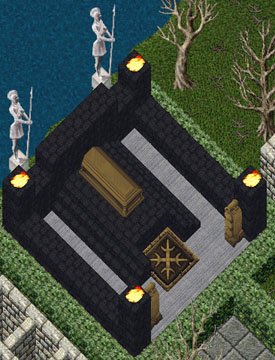 After the machine Blackthorn appeared following the initial departure of Lord British, it waged war on the kingdom but was killed in battle by Dawn while attacking Yew.

Its remains (and parts) were recovered and then entombed at the gravesite in a ceremony personally led by Lord British shortly before his second and final departure from Sosaria.

There are two monument stones at the gravesite, the first of which reads:

The second stone bears the inscription:

"Let His Life And Death Remind Us That Evil Can Corrupt Even The Most Principled Souls."

The castle grounds are still maintained and patrolled by guards with Chaos Shields, bearing Blackthorn's standard, the symbol of Chaos, which is also at the foot of the grave itself.

It was later revealed with the fiction The Awakening - Act VII that Exodus constructed a "facsimile" that took place of Blackthorn instead.