The term Virtue refers to the moral system of Ultima Online and to a game mechanic that grants bonuses for performing certain actions.

There are eight components of the virtue paradigm: Compassion, Honesty, Honor, Humility, Justice, Sacrifice, Spirituality, and Valor. The game mechanic is accessed via the Virtue Gump. The philosophy behind the Virtues is opposed by the philosophy of Chaos; the individual virtues are opposed by a sin that is its opposite. Additionally, each virtue has a mantra that is usually of use at the respective Shrine. 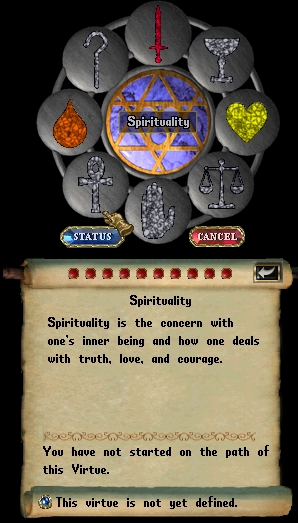 Most often, Virtue refers to the in-game system wherein players can perform certain actions based on or related to the Virtues, and achieve certain in-game powers.

In the 2D client, the system is accessed by double-clicking the symbol at the very top of a character's paperdoll. For information on how to access the Virtue system in the Enhanced Client, see Virtues Menu.

For detailed information on each virtue, prerequisite, and benefit, see the following main articles:

Each of the eight virtues are derived from one or more of the following Principles: Truth, Love, and Courage. Each principle is in turn embodied by an item: The Book of Truth, The Candle of Love, and the Bell of Courage.

All of these items have been seen in-game, or were dealt with at some point in the history of UO. The Bell of Courage was broken and then repaired through use of Blackrock. The Candle of Love is located under the winery in Yew. And while the Cavern of the Candle of Love is currently closed off, blessed candles that were lit by the Candle of Love are owned by some players and are seen from time to time. The Book of Truth is located in a chamber under the Lycaeum, and can be seen by players.

Here is a popularly-used chart that states the mantra of each virtue, its associated sin, and the principles from which it is derived, along with other information (for example, one will need to know the associated color of Humility to accomplish the Cloak of Humility quest).

The mantras are occasionally used in-game, but the "Words of Power" have never been used. The Virtues in Ultima lore were also associated with certain professions, but those seem less important in UO's more flexible system, and thus have been omitted from the chart.

The Embodiment of the Virtues in the game is the Avatar. In the single-player Ultima games, the Avatar was the character being played. In UO, the Avatar is basically a mythical "Christ figure" who is referred to but is not seen. He was the "stranger" who slew Mondain.

The relationship between the Principles and Virtues is sometimes explained this way:

Humility was described in the single-player games as the foundation of the Virtues. Without it, the other Virtues will of necessity fall into Pride, and become meaningless. The demon attacks on the city of Magincia during the fall of 2007, based on events in the single player games, were a form of punishment for the city's Pride. For another example of the importance of Humility as expressed within UO, see the article on the Shield of Recognition.

In Ultima V, Lord Blackthorn, the tyrant who ruled in Lord British's absence, codified the Britannian Virtues into a set of draconian laws.

Blackthorn's Code is a good illustration of the fact that the Virtues always come from one's own self rather than the norms of society; codifying ethics into law doesn't automatically make evil people good. Further, unethical lawmakers can take the Virtues and turn them into something that is quite contrary to what Virtues actually stand for.