New Magincia is one of the Cities & Towns of Ultima Online and the successor of the city of Magincia that is destroyed by demons during the Warriors of Destiny event cycle. It is on an island, and is accessible via Moongate or boat travel.

Depending on whom and when you ask, the city represents the Virtue of Humility or the Sin of Pride (Humility's evil opposite).

During the Fall of 2007, Magincia was attacked by demons (see Magincia Invasion) as part of the Warriors of Destiny event cycle, following the traditional Ultima lore which holds that the city is to be destroyed for its Pride.

On most of the major populated shards, the invasion was defeated the week of December 2, 2007, though the city was largely laid waste and ruined almost entirely. Pieces of it are available as items called rubble and are used by some as decoration.

On shards that "won" the invasion, there is a ferry from Trinsic. On shards that lost, such as Siege Perilous, Magincia was only accessible by boat. During the In the Shadow of Virtue event cycle, shards of the crystal of duplicity that are recovered from the Virtuebane duplicates are used to create a moongate and link the city to rest of the Britannia.

On the central island between Buccaneer's Den and Moonglow, Magincia was a natural target for plunder and magical side-effects. Ironically, it was the latter that tend to reduce the frequency of the former.

Perhaps the best way to describe Magincia at that time is "bright", but perhaps that is too kind. "Gaudy" might be more appropriate. Home to the largest diamond mine in the realm, the residents of Magincia had experienced the sensation of too much money. One of the many ways in which they had found to address this problem involved constructing ridiculously ornate buildings. Structurally sound shops would often had additional columns and supports solely to provide additional places in which to inlay gemstones and gold. The street signs were lettered in real silver, while the local watch wore badges that use precious metals to indicate rank.

Traditional Ultima lore, from the single-player games, called for this city to be destroyed by demons as a kind of punishment for its pride, with a demon lord named Virtuebane leading the unholy charge.

"Yet...," stated UO.com, "history cannot be denied. It may be diverted, delayed - even altered to a degree - but never denied. Shadows have begun moving in an undercurrent as vast as the ethereal void itself, a darkness that once set upon a Britannia many of us have never known . . . Yes, Magincia will burn."

And so it did.

Following these attacks, which sadly saw Players helping the attacks along in order to maximize the spawn of special loot known as Rubble, Magincia on most shards is a burnt-out wasteland, a shadow of its former self.

On shards that "won" the invasion, at first the use of transportation spells into the city remained disabled, but a ferry from Trinsic still existed, and there was the implication that there is hope for the city's future. On the shards that lost, the city looked about the same, but the sense of hope did not exist, and there was no ferry from Trinsic.

However, early in 2008, transportation spells (including Gate) were re-enabled to and from Magincia, and a teleporter was put in place near the Trinsic docks. On shards that won the invasion, the ferry service is also still available, though is largely supplanted by the teleporter and the use of transportation magics. Moongate travel to Magincia was a one-way trip as the gate was corrupted and could not be used to depart the island following the invasion.

The Magincia Invasion was later revealed to be part of the Warriors of Destiny event cycle, heralding the coming of the Shadowlords. 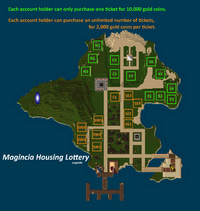 Map of the plot locations of New Magincia.
Click on the image to enlarge.

Ultima lore calls for the city to be eventually replaced by New Magincia, a city based on Humility rather than Pride. The city is rebuilt during the In the Shadow of Virtue event cycle, whether based on Pride or Humility is a subject for debate.

Britannian forces, motivated by revenge for the loss of their beloved Queen, set foot to Magincia in late March, 2011 to put an end to the threat of Bane Chosen forces and their leader Virtuebane once and for all. Ethereal Warriors commisioned by the Meer Council joined these forces from the north of the town. After a long fight, all of the duplicates of Virtuebane and dozens of Ancient Hellhounds are killed. Virtuebane is lured to the black moongate near the altar he set foot to Sosaria by the Britannian forces while special pies which are distributed by Ricardo are thrown to further humiliate him. He is sent back to his own realm and the black moongate along with the altar is destroyed.

Shards of the crystal of duplicity that are recovered from the Virtuebane duplicates are used to create a moongate and link it to rest of the Britannia.

In order to raise funds for the reconstruction and restoration of Magincia, the provisional government of Britannia conducted a lottery for purposes of granting the right to construct private residences and shops around the island which is followed by the New Magincia Bazaar.