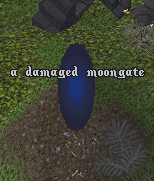 This term is often used to refer to the attacks by Demonic creatures on the city of Magincia during the Fall of 2007.

During this event cycle, the city was destroyed by beasts called Light Daemons and cursed Doom Artifacts dropped, as did event-specific Artifacts such as the Vorpal Blade and the Staff of Pyros.

Most shards won the scenario, but some, such as Siege Perilous, lost, with unknown long-term effects.

The event had to be "won" on each facet (Trammel and Felucca) separately.

During the Spring of 2008, it was revealed that the Magincia Invasion was, more or less, part of the Warriors of Destiny scenario, involving the Shadowlords.