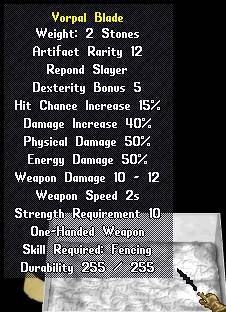 The Vorpal Blade is a Repond Slayer kryss that dropped during the Magincia Invasion. This event was Part I of the larger event arc Warriors of Destiny.

The manufacturers of UO stated that the Vorpal Blade will possess a unique ability to one-hit-kill "any NPC mobile." However, if this ability has been seen in-game then it has been on a creature that would have died in one hit anyway. No player has seen such vaunted ability in action. The word 'Vorpal' is derived from a poem named 'Jabberwocky' first published in 'Through the Looking Glass and What Alice Found There' by Lews Carroll in 1872 and popularized by the game Dungeons and Dragons.