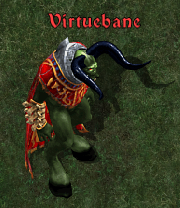 Virtuebane is a demon lord and leader of the Bane Chosen army. He has been portrayed in event fiction and also appeared during the invasions in shards and during his plot to kill Queen Dawn. His presence in Ultima Online began in the Fall of 2007, when Magincia was attacked and destroyed on all shards, and renewed with the In the Shadow of Virtue events.

He sought to conquer Sosaria with his legions of forces and is opposed by the Kingdom of Britannia, the Meer and Ophidians. His specific goals were to corrupt the Truth and to obtain the Crystal of Duplicity from the Kingdom of Britannia which he reached both of them. His army sacked blackrock from the Ophidians and Power Crystals from the Meer to construct powerful Blackrock Golems. In late March 2011, he was lured back to the black moongate in Magincia which he previously used to set foot to Sosaria.

Virtuebane is currently one of the four Legends encountered on the rooftop of the Shadowguard. He is extremely fast, and in addition to a dismount attack is able to stun players, displacing them several spaces away from him in a large explosion. He will often summon the aid of monsters such as Titans, Minotaur Captains and Daemons.

As with all bosses in Shadowguard, additional creatures are only spawned if the player has hit Virtuebane a set amount of times. If killed with nothing but pet damage(only tested on tamers), while slow, there will be no creatures & one can Word of Death from 25% to death. Starting Word of Death at 30% typically spawns a set of creatures on death.