Juo'nar was originally a paladin of Trinsic linked with an early murder committed by the Followers of Armageddon.

He committed several acts of evil, and was associated with frequent monster attacks. While initially connected to the Followers of Armageddon, he was later believed to be working largely on his own. (It remains unclear from available documents if he was ever involved with the Followers, or was an "Innocent Man Wrongly Accused" who later turned evil anyway.)

He was eventually slain by Finth Desryn, in revenge for the killing of Finth's wife Tali during a raid on a caravan near Skara Brae.

However, Juo'nar was brought back by Minax as a powerful Lich commander and led the Undead invasion of Trinsic, along with Minax. This attack was largely successful as the undead army took hold of Trinsic for weeks, until Dupre was able to raise an army to reclaim it.

At the close of the event, Dupre was thought to have killed Juo'nar. He was not seen again until Publish 90. 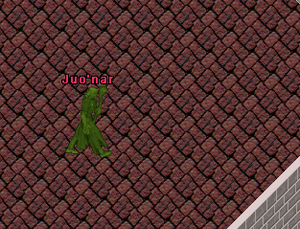 Juo'nar the Lich has returned and is currently one of the four Legends encountered on the rooftop of the Shadowguard. He is extremely fast, and in addition to a discord attack, has the ability to teleport any attacker directly to him. He will often summon the aid of monsters such as Skeletal Dragons, Lich Lords and Wailing Banshees.

As with all bosses in Shadowguard, additional creatures are only spawned if the player has hit Juo'nar a set amount of times. If killed with nothing but pet damage(only tested on tamers), while slow, there will be no creatures & one can Word of Death from 25% to death. Starting Word of Death at 30% typically spawns a set of creatures on death.