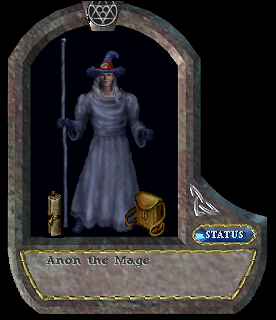 Anon was originally an NPC, mage in charge of the Mages' Council in Moonglow. The Council ended up evolving into the Council of Mages Faction. Anon objected to Nystul's casting of the spell that split the Trammel Facet off from Felucca. He blamed the spell, rather than Minax, for the devastation in Felucca. He also appears to have had a personal dispute of some kind with Nystul, neither approving of Nystul personally nor the latter's use of magic apart from the Council. From BNN audio stories, he appears to have had an odd Mongbat fetish, once commenting that he'd been caught in a closet "with twenty of them and a terrified llama."

Anon in human and elemental form

Anon the mage is currently one of the four Legends encountered on the rooftop of the Shadowguard. He is a skilled magic user that moves at moderate speeds, and periodically polymorphs into an elemental that converts damage into healing. He will often summon the aid of monsters such as Wisps, Gazers and Evil Mages.

When Anon changes form, attack with any element aside from the element he changed to. While in elemental form Anon is susceptible to Elemental slayer damage bonuses & heals based on the element he chose. Earth heals from Phys, Energy heals from Energy, etc.

For warriors, it is ideal to use 2 elements of weapon with elemental slayer & switch between them as Anon changes form to insure no healing from damage taken. For tamers, stop pets when Anon switches to the form that they deal the most damage in. For instance, stop Rune Beetles on energy llama, Dragons on Earth ele, and so on, proceeding to attack again once Anon changes back to human form.