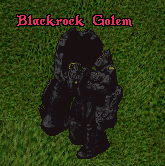 Blackrock Golems are powerul Golems created by the Bane Chosen after they sacked the Ophidian Crystalline Blackrock and the Meer Power Crystals during the In the Shadow of Virtue - Rise of the Bane Chosen live event. They are first seen when they invaded Britain in large numbers which resulted the Crystal of Duplicity being stolen. They were found in the ruins of Magincia and no longer spawn now that the event is over.