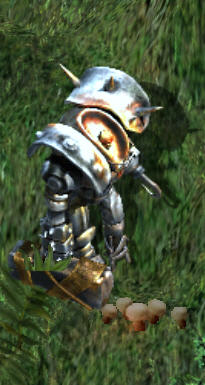 Built from metal, these hulking brutes are the resulting abomination of a marriage between machination and magic. Initially created for sinister purposes, these “iron men” are formidable foes, able to deliver stunning blows that can render their victims immobile. Their hard, metallic exterior protects them from most magic spells, and provides a stalwart barrier against weapons. They are not invincible, but they are certainly a challenge to defeat. Only the hardiest of adventurers should even attempt to cross a golem’s path.

Through research, Britannia’s society of Tinkers have successfully discovered the means to create these metal giants and control them. (See: Tinkered)

With Publish 85 Gadgetry Tables have been introduced. They allow the creation of an advanced tinkered golem once a day. Gadgetry Tables are house addons. Having the Tinker skill will assist making these advanced golems more powerful. Starts with capped skills: no training necessary.

Tinkered golems are much like their non-tinkered cousins. They are made with metal, and are brought to life through magic. However, due to the method in which they are created, their toughness is dependent on the skills of their maker. Many people, of various professions, find tinkered golems to be excellent companions, as they are able to follow commands much like tamed creatures, and they can be fiercely protective of those that they consider friends.

To contruct a golem, you need to have at least 70.0 in the Tinkering skill, as well as the following ingredients:

Once these parts have been collected into your pack, double click the Assembly to create the Golem. You'll need three pet control slots free to do this.

Some various points about tinkered golems: