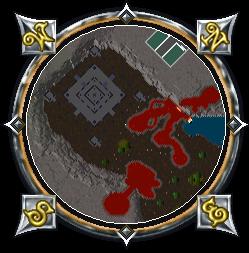 Introduced by the Third Dawn expansion, Exodus Dungeon is located in the southwest corner of Central Ilshenar. It was once home to the mysterious, and apparently dead, entity known as Lord Exodus. Being part machine, it was the spawn of Minax and Mondain. Lord Exodus was the ally of the Juka and Lord Blackthorn. Once, a great battle was fought here. As a result, the Gargoyle city of Ver Lor Reg was converted from a hostile den of oppressed gargoyles to a safe and civil city, before it is destroyed during the Call to Arms event.

The most dangerous part of this dungeon is not what is inside the dungeon, but what lies outside, namely Arcane Daemons, Dopplegangers, Fire Elementals, Molochs, and Quagmires, to name a few. The entrance to the dungeon is on the lowest floor of the "temple" and you simply walk over it. You drop through into the dungeon proper.

There are no cave walls or dirt floors in this dungeon, reflecting the mechanical origins of the place.

Scattered lightly througout the edifice are the following monsters: