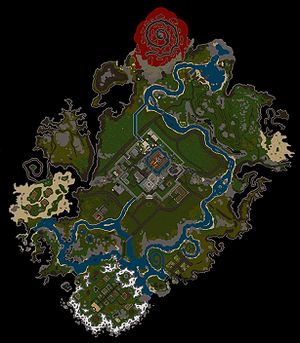 Ter Mur (From Gargish ter-múr: world) is a facet introduced with the Stygian Abyss expansion. Other than a single moongate south of the Royal City, Ter Mur can be reached by traversing the Stygian Abyss Dungeon from Britannia.

While lush, it is a land plagued with turmoil both mystical and political. Powerful and stoic masters of magic and steel, the Gargoyle race finds itself beset by challenges on all sides: The Void and supernatural terrors emerging from within; diminishing natural resources; and unrest from within the community itself as a result from their world torn apart by magics they are only now starting to comprehend.

Players will discover pockets of both unrelenting devotion as well as rebellious unrest within the Gargoyle community toward the Queen.

Quests are centered on gathering the skills to enhance the Gargoyles survival in a hostile and ever-changing land; securing the borders of Ter Mur against new foes; and perhaps meeting a few of the envoys with familiar faces from Ilshenar.