The Underworld is a Dungeon, which appeared with the Stygian Abyss expansion.

The entrance to the underworld is on Fire Island in Trammel (Fire Island in Felucca is unchanged) at the base of the volcano that appeared following the Shadowlords defeat. The dungeon itself is divided into several sections. Some territories are ruled by recent Human immigrants from Britain. Some areas can safely be classified as belonging, more or less, to the Goblins. Some areas chiefly exist to hint that things found within and/or provide access to the Stygian Abyss Dungeon. 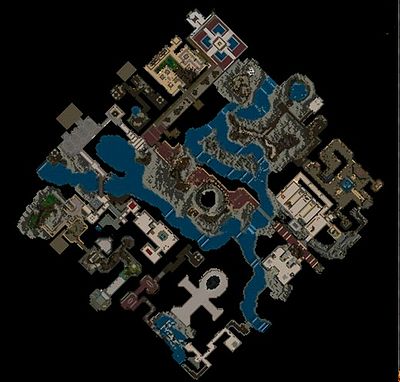 Map of the Underworld.
Click on the image to enlarge

Two guards welcome you to the Underworld near cannons, cannon balls, powder kegs and a stone memorial which can act as a shrine and resurrect you. Near the right cannon on the ground next to the cannonballs, a single cannon ball appears occasionally which is not a stealable and can be picked up from the ground.

At the end of this entrance hall, Garamon stands to help those seeking entrance to the Stygian Abyss Dungeon:

Greetings Adventurer! If you are seeking to enter the Abyss, I maybe of assistance to you.

There is a hidden door on the right wall of this hall near Garamon which needs to be double clicked to open. You also need to do the same to the other hidden door connected via a dark passage to open it and thus reach to a hall full of Rotworms and an occasional Blood Elemental. Following this hall to the south will take you to collapsed bridges connected with invisible teleporters. Using these, you will come to a hall with three ankhs and a red moongate. This red moongate will take you to the Tyball's Shadow. 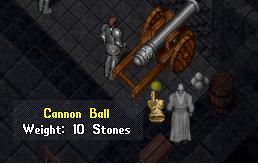 Skipping the hidden doors and heading to the left, you will face tens of Slimes and later Acid Slugs. Dont try to pass these creatures running, they can be quite deadly in those numbers! You will also see a room with a magic key and an instructions book. A Gremlin will suddenly appear from out of nowhere as soon as you come near this room. If you read the instructions you will see that this magic key is for the puzzles inside the Puzzle Room.

Successfully passing the Slimes and Acid Slugs, you will see the door of the Puzzle Room. Continuing down the stairs to the left, you will come to a room with magic vines on the walls:

You notice something odd about the vines covering the wall.

If you use Acid Sacs (which can be obtained from the corpses of Acid Slugs) to these walls covered with vines, you will reveal a dark passage to a hidden chamber. Tyball's Flask Stand can be found here but the main purpose of this room is get one of the keys needed for the quest to access the Stygian Abyss Dungeon.

Following the road, you will eventually come to a yard filled with Rotworms, a few Bloodworms and some body parts. These calamari like creatures might give even the strongest warrior serious headaches with their blood attacks. After passing these creatures and two metal doors later, you come to the Ariel Haven, the Human Encampment.

Four Npcs are present inside the human encampment: Gretchen the Alchemist, leader of the Society of Ariel Haven Elder Dugan the Prospector, Fiddling Tobin the Tinkerer and Quartermaster Flint. They all in need of help and have quests for you.

Undead and the Maze of Death

If you turn left from the entrance of the human encampment and pass across a stone bridge, you will come to a hall filled with Undead. There are two teleporters in this room: the left one teleports you to the shore to the south where Rotted Oars spawns while the right one teleports you to another location where Greater Poison Elemental can be found. Between these two teleporters, there is a hidden door that will take you to the Experimental Room. 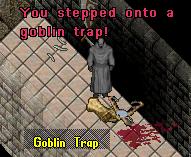 Continuing your way through the metal doors, sooner or later you will step onto a Goblin Trap. These traps can be picked up by using Remove Trap skill and wont come to you as surprising as the first time over the course of your journey, so dont run around here! Stop, heal yourself and then continue to your way to the next trap. Following the traps, you will see stairs down to the shore where a small island can be reached by using Teleport, Shadow Jump or just flying. Surrounded by the Krakens, you will find three stealables in this island: Mystic's Guard, Mysterious Supper and Bloody Spoon.

Just before the stairs, to your left, you will see a long hallway with Enter at your own risk sign, signing the entrance of the Maze of Death. Walking near the maze, you will suddenly be stopped:

You are filled with a sense of dread and impending doom! I might need something to help me navigate through this.

The thing you need is the Golden Compass which can be found inside the room just right of the entrance. You can also find a rolled map which opens a map of the Underworld dungeon from Ultima:Underworld when double clicked. Entering the Maze of Death, you will see a compass on your screen with arrows pointing to the next safe locations one step ahead. If you skip these or move to a different location, a trap will be released costing you a great deal of hit points. If you die inside the maze, your corpse will be teleported to the maze's entrance. You will eventually reach a small room containing the Puzzle Board.

You can skip the maze by using the barred metal door to the left which will take you to the Green Goblin Encampment. Green Goblins, Green Goblin Scouts and Green Goblin Alchemists can be found here as well as quest items like Flint's Logbook and Barrel of Barley. There are two green goblins that are in need of help and offer quests: Xenrr inside a small room to the west and the King of the Green Goblins, Vernix, near his throne in the northern hall.

Following the hall you entered by using the hidden door near the entrance will take you to a teleporter and a collapsed stone bridge. Using this teleporter or flying above the collapsed stone bridge, you will see spiral stairs which will take you down to the Stygian Abyss Dungeon. Skipping these stairs and up from the stairs to the right will take you to the Gray Goblin Encampment and the Crypt. You can also use the road connecting the two goblin encampments by heading east before entering the Maze of Death but this road has a lot of Goblin Traps and you also need to pass a yard full of Tangling Roots so the former one is safer.

Continuing from the throne room to the west, you will see Neville Brightwhistle trying to return to the Human Encampment. A little west is the Fountain of Fortune which can act as a shrine and resurrect you. There are a lot of Wolf Spiders, three Iron Beetle and a Sentinel Spider on this road as well as a Blood Elemental. The end of this road is the entrance of the Lair of Navrey Night-Eyes.

Monsters Found in the Underworld