The Britain Sewers only can be loosely considered a dungeon. It is primarily known as a passage to the Lost Lands. The sewers were introduced by UO's first expansion in 1998, along with the Lost Lands.

The sewer entrance is located inside the southern entrance to the battlement that runs across the City of Britain, east to west. Adventurers must descend one of the two ladders. The Lost Lands exit is just north of the large swamp southeast of Papua, known as Hoppers Bog. 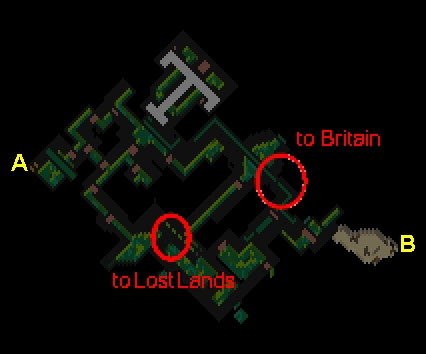 Some forum posts have noted the difficulty of navigating certain points of the sewers.

According to UOForums poster Stewan Seagull, "The trick is to jump off one of the high ledges down to the walk below. On the map, it's in the middle of the south side. [The walk] back [is] a similar jump on the north side."

On facet Trammel, the following creatures inhabit the sewers: