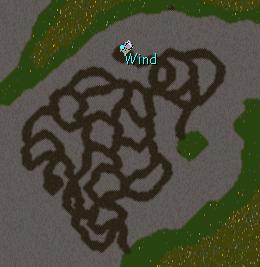 Wind is entered via a teleporter hidden in the mountains north of Britain. Characters and unridden Pets need over 70 Magery skill in order to be allowed through.

Note that simply running over the teleporter will not cause your minions to be brought with you - They must themselves step on it in order to be transported. One way to do this is to tell them to stay in one location, walk to the opposite side and then order them to follow you. In this way they will step on the plate and be transported prior to your character.

Be warned that Wind is just as much a dungeon as it is a city. Greater Dragons, Drakes, Liches and Daemons inhabit the warren of caves where you first appear. The more civilised area lays in the center of the zone.