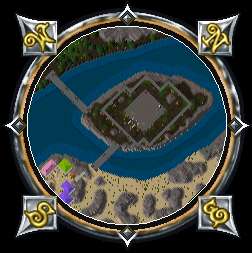 The Ancient Citadel is not to be confused with the Tokuno Islands Citadel, which is home to the Peerless Travesty and located on the eastern shore of Isamu-Jima.

This Ancient Citadel is on the facet of Ilshenar; the closest Moongates is Compassion. At roughly nine rooms in total, the Ancient Citadel is not a dungeon proper. Most characters that have completed the Friends of the Library quest have, at least, run past the place.

It appears to have once been home to a wealthy alchemist. Along with the two libraries, the master bedroom is still stocked with full jars and the third floor workshop contains lots of glassblown equipment. Other have posited that the building was a weigh station on some great trade route. Proponents of the latter theorem note the barracks on the second floor. To date, the jury is still out.

An Undead Slayer weapon and a Mage Slayer talisman would be a nice combination for the following mixture: